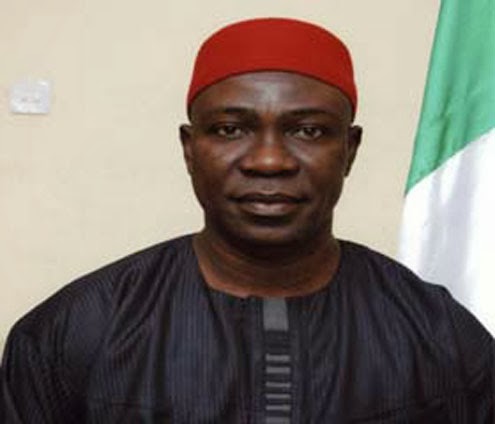 They said it was high time you named one project, business, or scholarship you attracted to you Ugbo community despite the donkey years you have spent in the USA. They said yours is a case of “kiriyo” (that is man who travels to another land, and having found good wine and women, forgets the road to his father’s house). They said it is a tall order to expect you to be of use to anybody when you have not been of any use to yourself. They said you have no single hut of your own to show for your decades sojourn in the USA.
Subscribe to our newsletter
7th January 2014
Dr. SKC Ogbonnia
Houston, Texas
USA
Mazi Ogbonnia,
It is with sadness that I write you over the latest in your series of attacks on the person of the Distinguished Senator Ike Ekweremadu, CFR, a great son of the Greater Awgu.
My sadness derives from the pains of having to spend my precious time to reply a frustrated never-do-well like you, who for lack of profitable occupation, and also for fear of the burdens of regrets and frustrations of a wasted life that idle times bring upon you, vent your anguish on those who have made success out of their own lives.
Obviously, yours is a typical case of the loafer who wasted his time in the forest of life. By the time he realizes that dusk approaches, he angrily cries behind, telling the bemused villagers that his peers fetched their own firewood from the evil forest. A failure and fool that he is, he thinks the only way to show himself as equally important is to attempt to wrestle and heckle his prosperous peers so that he could be counted among men.
Thus, I see the bricks you continually throw at Senator Ekweremadu as a way of seeking attention. You simply want to make it appear as though you are in a personality battle with the Distinguished Senator. But that is waste of time because even a single feather from Ekweremadu’s plum-filled cap would throw you high into the sky and land you in the bush. A  failure is a failure and a success is a success. Unfortunately, as we say in Awgu, “Ihere anaghi eme onye ara di ka osi eme umunna ya”- it is the madman’s kinsmen who suffer shame, not the madman because he knows no shame.

Meanwhile, you claimed that the Senator said your kinsmen denounced you. You lied! It was not the Senator who said so. It was your kinsmen, your community, and fellow constituents of Enugu West Senatorial District, which includes me who denounced you and your fallacious claims over the projects attracted by the Deputy President. (https://247ureports.com/ekweremadus-projects-community-constituents-denounce-skc-ogbonnia-over-false-claims/)
Here are the words of your own brother who led the Ugbo community to the Deputy Senate President: “We frown at the continuous and unwarranted attacks on your person by our own son despite all you have done and continue to do for our community and the entire Enugu West. The Ugbo community has had cause in the past to issue a statement roundly condemning SKC Ogbonnia’s excesses, but it is clear that these are deliberate acts of mischief. We want to urge you to ignore him and continue with your good work in Ugbo and Enugu State because he is entirely on his own. We totally denounce such mischief ”.
If you were sensible, you ought to know that if your people did not denounce you and your excesses as widely reported in the media, it is in their place, not in your place, to rebut the report. But you would also recall that they have denounced you so many times in sterner tones individually and as a town before now. You are entangled in battle with every member of your family, every successful man in Ugbo, and with your town union. Even in the USA, you still swim in controversies and play the spoiler anywhere our people want to gather as Ndigbo or Greater Awgu to work for the development of our people.
That said, it is laughable that rather than answer some cogent issues raised in the report, including the one I raised, you are busy side-stepping it.  For instance, I described your write up as satanic and show of ignorance. Importantly, I said that  “It is regrettable that while other people in the Diaspora are awarding scholarships, bringing foreign investors and partners to develop and add value to their communities, SKC Ogbonnia has only nuisance value to show for his long stay in the U.S.A”. I challenged you to name members of your phantom project monitoring team, as there was no such team in the first place. I added that “SKC Ogbonnia cannot be in the U.S.A and tell lies about what is happening at home because as far as we are concerned, he is a fugitive who is not in good terms with anybody and the youth of Enugu West advise him to come home and face his kinsmen and community, rather than parade himself as an investigator that he is not”. I stand by this. I travelled to your community the other day and they said I should pity you because you have not been home for about the last 10 years!
They said it was high time you named one project, business, or scholarship you attracted to you Ugbo community despite the donkey years you have spent in the USA. They said yours is a case of “kiriyo” (that is man who travels to another land, and having found good wine and women, forgets the road to his father’s house). They said it is a tall order to expect you to be of use to anybody when you have not been of any use to yourself. They said you have no single hut of your own to show for your decades sojourn in the USA.
Indeed, most times I wonder how a successful and respected family like your father’s house would have the misfortune of having a loafer like you among them. Kedu ebe mmiri siri bara ndi be Ogbonnia na opi ugbogholo? For instance, I know your brother, Hon. Alex Ogbonnia, a former Member of the Enugu State House of Assembly who is currently the Special Adviser on Public Affairs to the man you vilify, Senator Ekweremadu. Hon. Alex is just a sound mind and respectable fellow. Could it be all these attacks are aimed at getting the Deputy Senate President to sack your brother? Well, you are just wasting your time because the Ikeoha we know is not a little mind like you. Could it be you want him to get angry and stop bringing projects to your Ugbo community? Well, wake up, because in Ugbo, he is more of a son than you. It was certainly not for failure of transforming Ugbo land that he was conferred with the chieftaincy title of “Onwanaetirioha 1 of Ugbo”- the great moon that gives light to all. So, just come home for once and see if you can still find the road to your father’s house owing to the transformation Ikeoha, Senator Ekweremadu has brought to your town.
Having failed in life, you deserve pity and rehabilitation, not anger from Ekweremadu. And it is a sign of great leadership that despite your reckless rantings and malicious publications, Ekweremad has refused to dignify you by joining issues with a fool above forty.
Yours truly,
Comrade Osita Anih
Awgu, Enugu State