War Against Crimes – IGP Commends The Force For Improved Performance 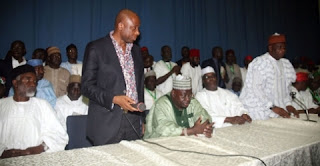 Following the recommendations of the IGP, the Police Service Commission (PSC) on 27thSeptember, 2013, approved the promotion of 39 Senior Police Officers to their next ranks. This is in line with the vision and mission of the present Police Administration to motivate and inspire personnel of the Force for greater efficiency and better service delivery, through the pursuit of a robust and a comprehensive welfare regime.
A breakdown of the list of the newly promoted officers showed that four (4) Commissioners of Police were promoted to the rank of Assistant Inspectors-General of Police (AIGs). Among the newly promoted AIGs are AIG Balla M. Nasarawa, fwc, who until his promotion, was the CP Anambra State Police Command. Others are AIG Edgar Tam Nanakumo, fwc, who is presently acting as the AIG in-charge Zone 12 with Headquarters in Bauchi; and AIG Mohammed J. Gana, fdc, who was the CP Federal Special Anti- Robbery Squad (SARS). Also promoted to AIG is AIG Sabo Ringim Ibrahim, who was acting as the AIG in-charge Border Patrol.
In addition to the newly promoted AIGs are eight (8) Deputy Commissioners of Police promoted to the rank of substantive Commissioners of Police. Seven (7) Assistant Commissioners of Police are now Deputy Commissioners of Police; twenty (20) Chief Superintendents of Police are promoted to Assistant Commissioners of Police.
Meanwhile, the IGP has congratulated all affected officers, commending the commitment and unique sacrifice with which they have been discharging their duties. He stated that the elevation of the officers was based on merit and they are therefore, expected to be more dutiful in carrying out the responsibilities of their new ranks. He further enjoined them to blaze the trail of providing quality leadership to their subordinate officers, in consonance with the on-going reformation agenda of the Force.
In a similar development, the IGP has ordered the immediate redeployment sixty (61) Senior Officers to various Police Commands and Formations, among whom are some of the newly promoted officers. This, according to the IGP, is part of measures to ensure effectiveness and efficiency in the fight against crimes and criminalities.  Affected in the redeployment exercise are six (6) Commissioners of Police (CPs), Twenty-six (26) Deputy Commissioners of Police (DCPs) and Twenty-nine (29) Assistant Commissioners of Police (ACPs). The affected CPs are CP Sherifat Disu Olajoku who is moved from Western Ports Authority Police Command to CP Administration ‘C’ Dept. Force Headquarters; CP Ambrose O. Aisabor, redeployed from CP Administration ‘A’ Dept — FHQ, Abuja to CP Western Ports Authority Police Command, Lagos; CP Irimiya Yerima is moved from Eastern Ports Authority Police Command, Port Harcourt, to CP Admin ‘A’ Dept, FHQ, Abuja; CP Tijani Baba who was the Deputy Commandant, Police College, Kaduna, is redeployed as CP Eastern Ports Authority Police Command, Port Harcourt; CP John Opadokun is moved from CP PMF, FHQ, Abuja, to CP Marine, FHQ, Lagos; while DCP Karma H. Hassan becomes the new CP Police Mobile Force (PMF), FHQ, Abuja. All postings take immediate effect.
CSP FRANK E. MBA
FORCE PUBLIC RELATIONS OFFICER,
FORCE HEADQUARTERS,
ABUJA.

Judgment Against Prince Oyinlola Is A “Miscarriage Of Justice” – New PDP