Judgment Against Prince Oyinlola Is A “Miscarriage Of Justice” – New PDP 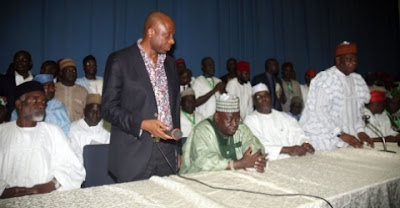 The Peoples Democratic Party (PDP) under the leadership of Alhaji Abubakar Kawu Baraje has described the judgment of the suit challenging Prince Oyinlola’s status as the PDP’s National Secretary as a “miscarriage of Justice”.
The factional PDP in an online statement signed by its National Spokesman, Chief Eze Chukwuemeka, said that the party learnt with shock of yesterday’s judgment by the Federal High Court Abuja, presided over by Justice Abdul Kafarati in the suit filed by the Ogun State chapter of PDP against PDP’s National Secretary, His Excellency, Prince Olagunsoye Oyinlola, former Governor of Osun State.
The breakaway PDP observed that in the judgment, Justice Abdul Kafarati ordered the PDP faction led by Alhaji Bamanga Tukur to swear in a new National Secretary for PDP and went ahead to order the Independent National Electoral Commission (INEC) to delete Prince Oyinlola’s name from its records as PDP’s National Secretary.
The Alhaji Abubakar Kawu Baraje-led PDP condemned what it described as “obvious and glaring miscarriage of justice” as the judgment was given in spite of the pendency of Prince Oyinlola’s suit over the subject matter at a superior court of competent jurisdiction – the Federal Court of Appeal Abuja.
The faction said it wish to inform Nigerians that Prince Oyinlola was never served any court processes before the judgment was delivered.
The splinter PDP went further to say that the judgment “unfortunately dishonours the Court of Appeal and His Lordship’s pronouncement” on the subject matter which negates procedures outlined in the Constitution of the PDP for the emergence of the party’s National Secretary.
The faction opined that the Judiciary was the last hope of the common man and a defender of the weak against the strong and appealed to the Judiciary not to indulge itself in anything that may tend to give a contrary impression.
The Baraji New PDP also appealed to its supporters and all PDP members to remain calm as arrangements are being made to appeal the judgment and ensure that justice is done in the matter.

War Against Crimes – IGP Commends The Force For Improved Performance

New PDP Alleges Presidency Crack Down on Its Leadership