Rivers Crisis: Jonathan Is Test-Running Fascism Ahead Of 2015 – APC 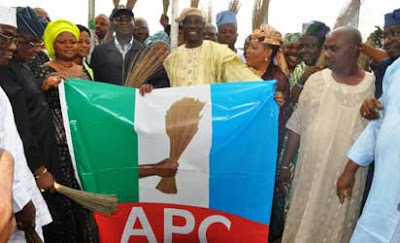 The All Progressives Congress (APC) has accused the presidency of using Rivers State as a testing ground for creeping fascism ahead of the 2015 elections, saying it is imperative for all Nigerians to pay a close attention to the apparently-instigated ugly developments in the state.
In a statement issued in Lagos on Sunday by its National Publicity Secretary, Alhaji Lai Mohammed, the party said it is raising the alarm because, as the saying goes, all it takes for evil to flourish is for goodmen to do nothing.
Subscribe to our newsletter
The party decried the worsening impunity and the violation of constitutional provisions, including the freedom of association and freedom of movement, in the state against those perceived to be against the President.
”The arrowhead of these grave acts is none other than the Rivers Commissioner of Police, Mbu Joseph Mbu, a malleable police officer who has put himself above the laws of the land and is now, undoubtedly, the Alternate Inspector-General of Police, who can neither be queried nor redeployed because his puppeteers are in the Aso Rock,” APC said.
”Imagine every State Police Commissioner in Nigeria behaving like Alternate IGP Mbu, who neither respects nor takes orders from the man constitutionally saddled with ensuring security in his state. Imagine every State Police Commissioner having the powers to determine who can move around and where, or who can assembly and where, just like Alternate IGP Mbu?
”While we may think this madness is restricted only to Rivers State, the danger is that if those behind the Rivers crisis can get away with their impunity, what prevents them from extending it to other states? What prevents them from raising lick-spittle police officers like Mbu to the rarefied ranks of Alternate IGPs where they take orders only from their masters? What will be the implication for the 2015 elections if men like Mbu take charge of all states? These are the questions that should agitate the minds of all Nigerians as the Rivers crisis continues unabated. All that is needed for despotism to reign in our clime is for more and more states to have men like Mbu as Police Commissioners,” it said.

APC said it decided to take the issue to the court of Nigerians because it is apparent that even the system of checks and balances set up by the country’s Constitution is not enough, hence a resolution of the National Assembly demanding the redeployment of Mbu has been shredded by the powers that be, the puppeteers of the Rivers crisis.
”When the resolutions of the National Assembly, where the true representatives of the people hold sway, are no longer worth the paper on which they are written, something is definitely wrong,” the party said.
It wondered what else Alternate IGP Mbu will do before he is redeployed from Rivers, where his main assignment seems to be to provide security only for the pro-Jonathan, pro-First Lady and pro-Wike elements while curtailing the Constitutionally-guaranteed rights of all other citizens in the state.
”Mbu’s police have barred the man elected to run Rivers State from accessing a road to his official residence, after launching verbal tirades at the State Chief Executive; Mbu’s police have dispersed citizens whose only offence is that they dared to gather for the purpose of collecting their appointment letters; Mbu’s police have taken it upon themselves to determine who can visit the state, while using tear-gas to ward off those they feel should not visit, whether or not they are State Governors, House of Assembly Speakers or Central Bank of Nigeria officials on assignment. Mbu’s police determine where and when students can move
around.
”If Mbu’s reign of the jungle and President Jonathan’s testing of fascism are allowed to continue in Rivers State, it is only a matter of time before the entire country will become their playground, with deadly consequences for all. It is time to stop the madness in Rivers State, where the Chief Security Officer has been put in a position where he is fearful for his own life,” APC said.