Redeploy Mbu Now, 4 Northern Governors Tells IG Of Police! Or We Will Withdraw Our Funding Of Police In Our States. 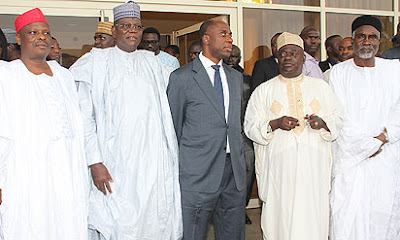 Four northern Governors who were yesterday pelted with stones and other objects in Rivers State have called for the removal of the Police Commissioner in the State. The four governor who paid Governor Amaechi visit are governors Rabiu Kwankwaso of Kano, Babaginda Aliyu of Niger, Sule Lamido of Jigawa state and Murtala Nyako of Adamawa State.
After a three hours long meeting the four governors released a statement which read thus; we have come to visit with our colleague and brother the Governor of Rivers State Rt. Hon Chibuike Rotimi Amaechi, CON, Chairman Nigeria Governors Forum.
Subscribe to our newsletter
“The visit is to ascertain for ourselves some of the things we have read in the newspapers, seen on television and heard on radio which is threats to peace, security and democracy. We are pleased to notice the peaceful atmosphere in town and that people in the state are going about their normal business and that the governor and government are in charge. This is especially reassuring as opposed to the organised protest by a handful of persons at the Port Harcourt Airport when we arrived.”
“Having interacted with our colleague and other persons, we are shocked at the role of the police in Rivers State and condemn its clear partisanship in the show of shame that took place at the Rivers State House of Assembly. As Chief Executives of our states who have sworn to protect lives and property in our various states, we are particularly troubled by the development in Rivers State. We commend the House of Representatives for its proactive leadership in the crisis and appreciate the Senate committee’s thoroughness in addressing the matter.”
“We wish to call on the Inspector-General of police to hearken to the voice of reason and immediately redeploy and discipline Commissioner Mbu. His actions smirk of unprofessionalism and political partisanship which is unbecoming of his office. With the way the police are being used and abused and with officers like Mbu in the force, we do not see the need for state governments to fund an antagonistic police and may be forced to reconsider our position on the financial contribution of the states towards the funding of the Police.”

“Arising from the actions of the police and Mr. Joseph Mbu in Rivers State, the call for state police as a constitutional provision has become a necessity. We note that events in Rivers State have again brought to the fore the question of true federalism and the need for institutions derived from constitutions be allowed to function without undue interference. As federating units, we must be allowed the space to guarantee our people sustainable development as provided by the Constitution.”
“We acknowledge the great work Governor Amaechi and his team are doing in Rivers State and commend his maturity and calm even in the face of apparent persecution. We join well meaning Nigerians to call on all political actors to diffuse tension and stop all actions capable of overheating the polity and derailing our nascent democracy. We must all work together to build one united and indivisible nation and strengthen our democracy.”
It will be recalled that protesters from the Nyesom Wike inspired Grassroots Network Initiative (GNI) staged an airport protest in opposition to the visit which led to confrontation with pro Amaechi supporters at the airport.

2015: Northern Elders Says NO To Jonathan