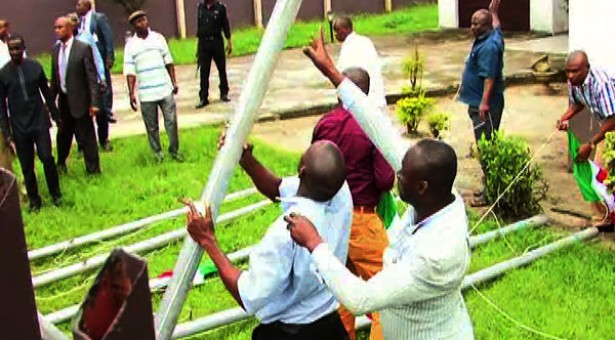 The crisis rocking the Peoples’ Democratic Party (PDP) has continued to spiral, and this time into Rivers state.
Mufty-wearing police officers led by Sam Okaura disrupted the secretariat flag off ceremony of the Baraje –led faction of the PDP, the secretariat is supposed to be the Rivers state chapter of the party, after the Chief of Staff of the Rivers state Governor, Chubuike Amaechi declared the secretariat open in Port Harcourt the Rivers state capital today.
Subscribe to our newsletter
The Chief of Staff, Tony Okorocha, in his opening address said: “in strict obedience to the directive of the national leadership of the New PDP, I hereby open the office of the Rivers state chapter,” while declaring open the New PDP secretariat.
An action, that he cited as a response to impunity, recklessness and dictatorial tendencies which characterised the former leadership of the PDP, as he commended the  G7 governors for their display of uncommon courage and called them ‘heroes of democracy’ while vowing to stand by the Baraje led faction of the PDP.
Minutes after raising the PDP flag and the coat of arms to flag off the ceremony, police officials who identified themselves as officials of the state C.I.D, stormed the premises disrupting the ceremony, embarrassing both politicians and journalists who were present.

The C.I.D officials went further to pull down the national flags and the PDP flag, after the team leader, who identified himself Sam Okaura attributed their action (police officers) to ensuring that law and order is being upheld at all time, and anything short of that will not be tolerated.
“What we have done here is to stop any illegality; we will not allow anybody to take laws into his hands
“We will go all out to ensure that we maintain law and order in this state, anybody that takes law into his hands will be dealt with accordingly, that’s exactly what we have done.
“We don’t have any secretariat and anybody who have come to hoist any flag here will be dealt with, thats what we have done and nothing more than that”
Source: Channels Tv