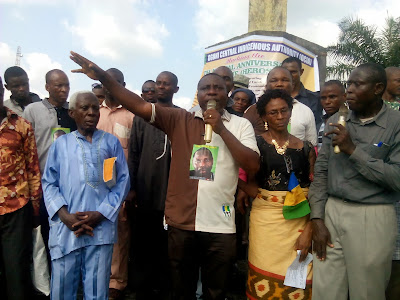 The people of Ogoni ethnic nationality in the Niger Delta Region of Nigeria have demanded for the establishment of  “Ken Saro-Wiwa University” in the area. The people also called on the Federal Government of Nigeria to implement UNEP Report on Ogoni which was released in August 2011 without further delay. The Ogonis made their positions known on Sunday, November 10, 2013 during this year’s commemoration of the eighteenth anniversary of the murder of Ken Saro-Wiwa and eight of his kinsmen in 1995 by the late general Sani Abacha.
Subscribe to our newsletter
Speaking to journalists at the Peace and Freedom Centre, Bori, venue of the annual event, Celestine AkpoBari, a human and environmental rights activist berated the Federal Government of Nigeria for the continued delay in the implementation of UNEP Report.
Comrade Celestine AkpoBari who is also the National Coordinator of Ogoni Solidarity Forum used the opportunity to announce donation of the ill-fated Banana Farm established in the area by the Rivers State Government under controversial circumstances to the Federal Government through the Minister for Education for the establishment of a Ken Saro-Wiwa University.
The rights activist who had earlier took a swipe at Hon. Nyesom Wike for criticizing the Banana Farm Project that he was part of the designing process as Chief of Staff Government House however, said he is happy that the likes of Senator Lee Maeba and Supervisory Minister for Education Hon. Nyesom Wike have agreed with the positions of the people of Ogoni that sitting Banana Farm in the area was wrong and challenged Hon Wike to use his position as Supervisory Minister for Education to ensure that a Ken Saro-Wiwa University is established at the Banana Farm site and use his closeness with Mr. President to push for the implementation of UNEP Report on Ogoni if he loves the Ogonis as he claimed.

His words “the ogonis didn’t want banana farm but they forced it on them and killed ogonis in the process. At that time, nobody seem to care and now that traditional landmarks have been removed people are struggling to show concern and playing politics with the pains and misery of the people.
He opined “If Mr. Wike loves the Ogoni he should use his position to ensure that Ken Saro-Wiwa University is established at the Banana Farm site and use his closeness with President Jonathan to influence immediate implementation of UNEP Report on Ogoni”
Comrade AkpoBari also said with the expiration of the ninety days ultimatum issued for the implementation of UNEP Report, the Ogoni will take steps to force the federal government to implement the report.
The rights activist who had on Saturday, November 9 led a group of Ogoni in a candle light procession in honour of Ken Saro-Wiwa in Port Harcourt called on Ogonis to be steadfast as all that Ken Saro-Wiwa fought and died for will be achieved.
While requesting that all political parties in Rivers State, field Ogoni candidates for governorship in 2015, Comrade Celestine AkpoBari further demanded for the immediate trial of all those who played different roles in the murder of Ken Saro Wiwa and eight others in 1995.