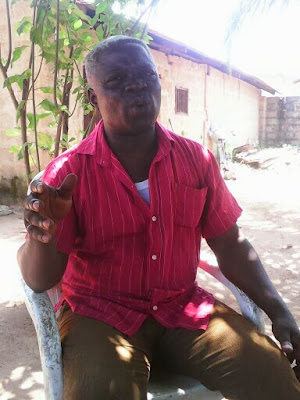 Barrister Zakari Alumaga is the legal Adviser to Eggon worship group which was fingered for the massacre of over 90 security agents at Alakyo on the 7/5/2013 while on legal operation,The coordinator to the chief priest also pointed accusing fingers on the state Governor for supporting them financially. He also gave reasons why Ombatse drag the state Government to court, He aver that Eggons deserve a special place in the politics of Nasarawa state: Excerpt

Barrister as the legal Adviser to the outlawed Ombatse and coordinator to the chief priest of Alakyo can we know the reasons why Baba Alakyo defy the commissions invitation on almost two occasions?
Subscribe to our newsletter
The known appearance of Baba at the commission was due to the poor security arrangement at the venue of the Judicial commission of Inquiry, The arrangement was a total flaw, Though nobody communicate to me  as the coordinator of Ombatse group including the commissioner of Justice I’m not intimated on the situation on ground.
The second reason was on health ground, you know Baba like any other person is liable to fail sick.
Again how do you expect a person of such pedigree be attach with a single police man, Baba is now a celebrity and he needed a tight security around him, we were told that adequate security will be provided but to my dismay it was an opposite.
Barrister sir, did somebody on the capacity of the chief priest who was allege to be behind the killings of security operatives at Alakyo deserve any security cover been so powerful ?
The known appearance of Baba at the commission is an eye opener that the ongoing commission of Inquiry will not yielded any fruitful result, That is exactly what Ombatse want right from the onset of the commission,Eggon counsels revolt to withdraw from the fact finding commission, The modus  operandis of the commission are almost specific on Eggon,out of the 8 term of reference of the commission, five are on Eggon nation, The intention of the state Government was to give a dog a bad name in other to hang it, The Judicial Commission of Inquiry is as good as not constituting it at all.
The commission is a toothless bulldog, it can only bark but cannot bite, By the way the commission  does not have the right to tried somebody, Instead their role is to submit their findings to the state Government while the state Government after receiving  it will implement the report, The Governor is using the commission as a  tool to have soft landing to prosecute some selected Eggon people.
The commission was a decoy by the state Government to indict certain persons as supporters, abbetors, financiers of Ombatse group, The Judicial commission of Inquiry is the worst road,i said this because everything in the commission was centered on Eggon.
You drag NSG, Commission of Inquiry and the commissioner of Justice to the state High court for tramping on your Fundamental Human Right to freedom of Association as well claiming N500m damages? Sir what do you intend to achieve?
We the Ombatse want the court to restrain the commission from submitting its report to the Governor while the Governor should be stop from implementing  the report submitted to him, The report if submitted  will serve as leverage to prosecute the Eggons who were accused of masterminding the killing of other ethnic groups
Even without prosecuting the Eggons the report will ridicule our person as a killer that was why we go to court. Again the worst part of the matter was the public uproar on Alakyo incident which consume scores of security operatives by Eggons, Nobody was talking about the over 249 Eggons killed in the different communities in the state, Anywhere you go to is Alakyo killings,Find time and go to Alakyo  and see things for yourself what happen on the 7/ 5/20130,The security in question meet their untimely death on their way to arrest the chief  priest at Alakyo. This insanity if Almakura listen to our advice things like this would not have happen. The Governor defy the advice of the former Chief Judge, He was advice to delay the operation to a later date but he failed to deaf ears, He defy the advice of his Special Adviser on security matters rtd General AT Umar.
Despite the proscription of Ombatse group with the application of legal notice number 4  of Northern Nigeria it operation remains unabated, can you tell us why ?
In spite of the proscription Ombatse is waxing stronger, The application of legal notice number 4 of Northern Nigeria is a bad law altogether while the Judicial commission of Inquiry is illegal, we are waiting for the time to come, That will be the appropriate avenue to tell the world that Governor Almakura also participate on Ombatse exercise, We know who are the sponsors and who is buying arms to the youth.
Legal Adviser in one of your press briefing you aver that only bona-fide Eggon is a member of Ombatse why now that you said Almakura also participate in Ombatse exercise ?

What are you talking about, Is the one giving us money, The last time he invited Ombatse he gave us N1m,Is  it not  a support?, must he participate actively.
Governor Almakura buttress that he gave Ombatse and ECDA N1m to buy soft drinks and to enable you transport yourself to your destination but in return you disclosed that he was the financier?
He is a liar, how can a sitting Governor gave N1m to just 50 People, Is not possible with that colossal amount of money, The Governor supported us financially.
Ombatse Group Was Centered On 2015 Governorship, I.E Governor Must Come From Eggon Extraction?
The crisis emanated because of breach of agreement between two politicians, one of them promise to hand over power to the other come 2015,The year 2015 is our time or else no Nasarawa state, The coming of Almakura is uncertain.
We will show our true when campaign period comes whether he will come to us to converse for vote, And on our part if really we want power we will come up with a systematic approach but not through killings and i tell you Ombatse will come to it if  all the tribe refuse to vote for us, Between now and 2015 I assured you we will face the Governor squarely.
But Barrister in one of your statement you commended Governor Almakura for appointing three Eggon sons and daughters as commissioners, which you said even Ewuga when voted to power will not accommodate the Eggons why suddenly  the  twist of event?
Honestly I will always support good deeding applauded the Governor on that aspect but on the other hand i would not aligned myself with him, Almakura was somebody that did not listen advice from the people despite bunch of advisers.
What are your personal grudges with Governor Almakura?
Thank you for asking this question, Ombatse gave Governor Condition to ceasefire that is to relinquish Hamza Elayo, The incumbent commissioner for Information and Ethical Reorientation and the Special Adviser, Abdullahi Mohammed, The commissioner for Information is Nasarawa Governor in proxy, The two people short-change the Governor by dictating.
Is Ombatse a new religion?.
Ombatse is not the emergence of a new religion as you rightly asked, is a conglomeration of people with the same thought made up of Muslims, Christians and free-thinkers converge at a prayer house headed by a chief priest that form a prayer group to pray for the sustenance of peace of the state.
Sir in addition Ajili is your God?
Ajili is just a deity which we seek for assistant from and he answers our prayers at any time we beam our searchlight on him.