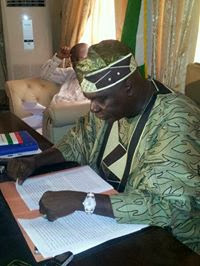 The crisis rocking the Peoples Democratic Party, is getting messier, this is as  Prince Olagunsoye Oyinlola yesterday held a press only the Supreme Court can remove him as the PDP National Secretary.
According to Oyinlola he said; “On Monday night, I heard through the media, my purported suspension from the Peoples Democratic Party (PDP) by the Alhaji Bamanga Tukur led National Working Committee (NWC). I have since gone through the press statement containing my purported suspension and have come to the conclusion that I should make a formal reaction to this latest act of impunity by a section of the party, that is clearly out to ridicule the judiciary, denigrate the rule of law and destroy the very basic foundation of constitutionalism in our country. You will recall that on January 11, this year, Justice Abdul Kafarati of the Federal High Court, Abuja, ordered my removal from office as the National Secretary of the PDP in his judgement, in a suit instituted by a faction of the Ogun state chapter of the party . Although I immediately appealed that court verdict, the Bamanga Tukur led PDP swiftly swore in my deputy as acting National Secretary, declaring that the judgement was declaratory, hence its implementation could not be delayed.”
Subscribe to our newsletter
“Narrating the issues Oyinlola said; “The PDP and my humble self appealed that judgement. Surprisingly, the PDP, which was vicariously liable for my actions as National Secretary almost immediately, and without any reason or justification, withdrew its appeal. I was requested to pursue my appeal and report back if my petition lodged at the Court of Appeal succeeded. From then on, I patiently and diligently pursued my case at the Appeal Court  which, a few days ago, upturned the Federal High Court verdict and re-validated my mandate as the validly elected  PDP National Secretary. I expected the party to abide by that judgment. It was therefore, shocking and unbelievable  when I got to know through the media that I had been suspended from the party as a consequence of my winning a court case. The history of the PDP is one of resistance to dictatorship and impunity. It is also a solid story of robust opposition to all forms of negation of constitutionalism and the rule of law. The PDP is a product of the rule of law and that realization informed my shock at this blatant assault on our courts, this unfortunate affront against the judiciary, good conscience and morality.”
According to Oyinlola, he said if the Tukur leadership of the PDP felt dissatisfied with the court decision, it should have appealed the verdict rather than declaring war against the judiciary; “Even then, I need to stress the unconstitutionality of this act of suspension of Oyinlola, a member of the National  Executive Committee of the PDP. In saying this, I wish to invite the attention of Nigerians to the provisions of section 57 of the PDP constitution which states in detail, the procedure for disciplining members of the party. Specifically, section 57 (4) states that “where an allegation is made against a member of the party, the Disciplinary Committee shall   inform the member in writing of the allegations made against him or her.” Nobody has till date informed me of any wrong doing against my party.
Again, Section 57 (6) is even more apposite here. It gives the consequences of not giving a member a fair hearing before a disciplinary action is taken against him or her. It states: ” Any decision taken against a member who has not been informed of the charges against him or her, or, has not been given any opportunity of defending himself or herself shall be null and void.”
“As to Tukur’s NWC suspending me so as to preclude me from enjoying the relief  granted me by the Court of Appeal , I wish to shock them by informing them of the futility of their action. They should have been diligent enough to read section 57 (7) of our party’s constitution. It states:  “Notwithstanding any other provision relating to discipline, no Executive Committee at any level, except the National Executive Committee, shall entertain any question of discipline as may relate  or concern a member of the National Executive Committee, Deputy Governors or members of the National  Assembly…” That is what our constitution says. I am a member of the NEC and so Tukur’s  NWC can only submit a complaint to NEC concerning me or any other member  of the party listed above,” He said.
Speaking further he said; “For the records, Olagunsoye Oyinlola, as a loyal and committed PDP member, who has over the years been a lover of peace and amity, has demonstrated his preference for methodical and urbane conduct in office, by spear-heading several peace initiatives and amicable resolution of disputes. Accordingly, I have, in line with my stance on harmonious relationships and strict adherence to orderliness and respect for truth taken several steps in the past ten months since I was illegally removed from office by a contrived court ruling. Let me state with humility, that as a human being with feelings, I am bound to be hurt and aggrieved at the inhuman and unjust treatment meted to me in the course of the performance of my duties as national secretary. I, therefore, subscribed to several peace plans in line with the constitution of the PDP, as engineered by several organs, interests and individuals that have stakes in the affairs of the PDP. That itself is in conformity with the relevant sections of the PDP constitution on seeking redress by aggrieved party members.”

“Among others, we met and discussed my plight a couple of times with the national leader of the PDP, His Excellency, Mr. President, Dr. Goodluck Jonathan, GCFR. I also made representations to the Governor Ibrahim Shema Committee set up by PDP Governors to examine the political crises in the South-west zone of the PDP through a memorandum presented to the body. Furthermore, I submitted a memorandum to the Committee headed by the esteemed Chairman of the Board of Trustees of the PDP, Chief Tony Anenih, and the Prof. Jerry Gana panel on the last PDP special national convention, among many other moves to resolve the impasse amicably. It could be safely stated that I took adequate steps to register my displeasure at the manner I was shabbily treated by the NWC of the PDP, which went to the extent of withdrawing the appeals filed on my behalf at the Federal High Court, Abuja; and the Lagos Division of the Court of Appeal, with an apparent intention of pushing me out of the PDP at all costs. My persecutors owe me an explanation on why I am being unjustly persecuted, and vilified unduly; especially considering the fact that no pronouncement has been made on the representations I have made to various authorities of the party in the past 10 months, aside from my illegal removal from office. The causes and effects of the political crises must have been examined by the various bodies that investigated the conducts of all the aggrieved PDP members in relation to the handling of the crises by party leaders. To have resorted to an anomalous decision to suspend an accused without allowing for a fair hearing makes the NWC appear to be a body at the crossroad. That decision, which is designed to serve the self-interest of a clique, destroys the very basis of internal democracy in PDP and makes nonsense out of the principles and values which all right-thinking members of the society cherish.”
According him he said; “It is more than a huge joke and travesty of justice that in the process of attempting to illegally terminate Oyinlola’s membership of the PDP, the PDP NWC violated the party’s constitution by refusing to give me – the accused top official and member of the National Executive Committee of the ruling party a fair hearing, before my purported suspension from the party. It is tragic that all these do not portray the actors as being free from destructive bias and an irrational fear of Oyinlola’s penchant for due process. What could be a better proof of their feverish struggle to prevent Oyinlola from operating at the national secretariat than the PDP counsel’s vow to the press last January that ”Oyinlola will never be allowed to return to office as PDP scribe?”
“I also understand that Tukur’s NWC spoke about referring my case  to the Disciplinary Committee. I do not know the disciplinary committee they are talking about because, the one set up by the Tukur leadership has not been approved by the NEC as stipulated by the constitution of the party and so cannot exist talk less of trying anyone.
“I do not want to believe that there is no one in Tukur’s NWC knowledgeable  in the provisions of the party’s constitution and in the operation of the rule of law. I would rather hold on to the belief that the rush to subvert the rule of law and mock our judicial system simply blinded the hawks in that NWC to what the law says.
“In saying all the above, gentlemen of the press, I am reminding Tukur’s NWC that the import of the court of Appeal judgement and  having been empowered by the constitution of our party, I remain the undisputed National Secretary of the PDP. If they are so determined to discipline me for whatever wrong they perceive, they should report me to the National Executive Committee of the party. There is no short-cut to it as long as the party’s acts and conducts are governed by its own constitution and the constitution of the Federal Republic of Nigeria, which is the ground norm.”
“I also invite their attention to section 36(a-e) of the PDP constitution which spells out the powers and duties of the National Secretary. I hope they have adverted their minds to the consequences of having illegal persons performing those functions and exercising such powers in clear breach of the law.  The only person who can legitimately exercise those functions today and unless the Supreme Court  says otherwise is Olagunsoye Oyinlola.  I hope and pray they know,” he said.
“Certainly, to live in terrible hate and perpetual fear is a terrible end to design and I will never allow my conscience to be imprisoned, while contributing my quota to the development of the PDP or any organization for that matter. Leadership must not allow itself to be part of a problem it is attempting to solve, as the result of this would definitely be loss of both credibility and efficacy to effect positive changes. Opinions must certainly differ on issues and developments, since we cannot all see through the same side of the prism in like manner. I am of the conviction that we could do better, as the ruling political party to restore and respect the rule of law, enshrine an ethic of accountability, fair play, responsibility in leadership and institutionalize the principles of equality, justice and respect for objectivity and truth. Doing otherwise exposes us to the ridicule of the advanced world as the political arena assumes higher levels of activity,” he said.
According to Oyinlola he said that he remains the National Secretary of the PDP – except and until the Supreme Court says otherwise, any other contraption from Tukur’s NWC is illegal, null and void.

Crisis In CAN As Pastors Move Against CAN President