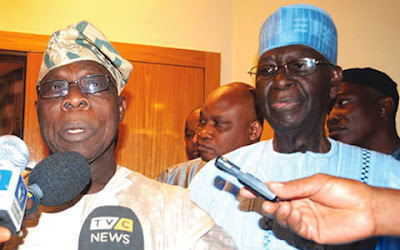 The Kawu Baraje and Bamanga Tukur factions of the Peoples Democratic Party, PDP were last night poised for a long standoff, following apparent efforts by the Presidency to fight off proposals being articulated by the Chief Olusegun Obasanjo-led elders’ committee.
The elders committee which met at the weekend following meetings with the two factions, it was learnt, had made some proposals towards resolution of the crisis in the party. Among the recommendations were dissolution of the executives of the Tukur and Baraje-led factions of the party and the scheduling of a fresh convention for the election of a fresh and united executive.
Subscribe to our newsletter
Under the arrangement it was learnt the office of National Chairman will be conceded to President Goodluck Jonathan; Deputy National Chairman conceded to either the Chairman, Board of Trustees, BoT, Chief Tony Anenih, or Governor Godswill Akpabio, Chairman of the PDP Governors Forum. Both Anenih and Akpabio are from the South-South where the office of Deputy National Chairman is zoned to.
Obasanjo favours Ladoja as National Secretary
The office of National Secretary and other offices zoned to the South-West it was learnt, would be conceded to President Obasanjo who, it was learnt, was already set to shove his new-found friend, Senator Rasheed Ladoja for the prime position.
Proposal for Amaechi’s return
Under the proposals, the Adamawa and Rivers State executives of the party that were put at abeyance on account of the lingering crises in the party will be restored just as Governor Rotimi Amaechi of Rivers State who was suspended would be reinstated upon expiration of the 30-day period as provided by the constitution.
Meanwhile, the PDP National Publicity Secretary, Chief Olisa Metuh has fended off insinuations of a role by the opposition All Progressives Congress, APC in the crisis in the party. Metuh, in a session with newsmen in Lagos, said the APC is too insignificant and minuscule to be a factor in what he described as an intra-party dispute. He also put in a robust defence of  Tukur’s leadership of the party, describing the National Chairman as the kind of elixir needed to manage the PDP at this time.
The Obasanjo panel included Anenih and former military president, Gen. Ibrahim Babangida.
The report is yet to be presented to President Jonathan who is the leader of the party.
In proposing a fresh convention, sources disclosed that the Obasanjo panel was not unmindful of the financial implications of holding a new convention but as it was learnt, panellists were said to have affirmed that “money should not be a hindrance to doing the right thing.”
Jonathan 2015

The panel report did not touch on the sensitive matter of President Jonathan contesting another term in office. Vanguard learnt that the panel decided not to touch the issue because of both parties’ strong positions on it.
However, there were indications that President Jonathan may not acquiesce to the proposals as raised by the elders.
Presidency sources disclosed that dissolving the Tukur executive and going with most of the other recommendations would mean the Presidency losing its present advantages.
In an apparent effort to bolster its forces in the ensuing battle, it was learnt that three ad-hoc committees were constituted by the President before he travelled to Kenya last week to articulate possible solutions to the crisis.
The committees it was learnt include Legal, Political and Contact. The committees are now working on ways of quenching the crisis in the party and to contain the Baraje forces. Presidency sources disclosed that the committees are to propose their recommendations to the President tomorrow.
The President, it was learnt, was inclined towards a holistic solution of the crisis to restore order in the party without condoning indiscipline.
In that direction, the President it was understood, may not give in to the demands of some of the governors that the Economic and Financial Crimes Commission, EFCC be pulled out from investigating some states. Some of the seven governors aligned to the Baraje faction of the party were alleged to have bitterly complained of being harassed by the EFCC purely on political grounds.
We give no attention to APC
Meanwhile, the Chief Olisa Metuh has dismissed insinuations of the involvement of the APC in the unfolding crisis in the ruling party.
Metuh in an interview in Lagos said:
“The APC as currently constituted has no capacity, no power to have any influence whatsoever in the challenges in the party and they are of  no consequences whatsoever and we do not pay any attention to them. They have no power, no influence, no position, no capacity to influence anything that is happening in the party.
“The APC is insignificant and they are unimportant in the scheme of things. What is important to us as a party is to resolve with our brothers and to have a final resolution of this matter, to be in one accord and have unity with our brothers so that the PDP can continue to rule. But the role of APC is non-existent in this matter. They are unimportant, they are insignificant and of no effect and we do not pay attention to the APC as a body and the individuals therein. They are of no consequence whatsoever.”
Source: Vanguard

Tension In Borno As Govt Moves To Demolish Churches, Schools