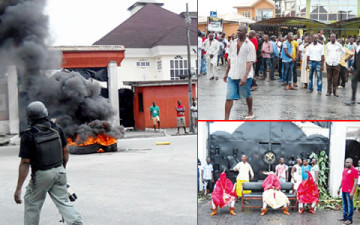 The Delta State Governor, Dr.  Emmanuel Uduaghan,   has appealed to thousands of Itsekiri  protesting the bid by their  monarch to jettison their  traditional beliefs  to remain calm, saying he was already meeting with stakeholders   to resolve the matter.
Subscribe to our newsletter
Uduaghan, who arrived the palace at about 3.45pm on Sunday, was met by the surging protesters, who appealed to him to mediate in the crisis.
An online news portal, THE WILL, reported that the   governor, was   allowed into  the palace without  his security aides,  came out after about 15 minutes to address the protesters.
Urging  the protesters  to exercise restraint,  he  said he had discussed with   Atunwase II, the chiefs and the youth  over the issue and expressed  gratitude to the protesters for conducting themselves in a peaceful manner.
The palace of the Olu of Warri was barricaded for the third day by the protesters who erected canopies in the front gate.
Some women and youths also erected canopies by the side fence of the palace where they cooked and danced.
Itshekiri masquerades were also brought in to spice up  the protest as they banged   the gate of the palace while the protest lasted.

The protest was sparked off by the monarch’s decision to, among others,  abolish the ancient Itshekiri masquerades which are paraded during traditional festivals.
While the monarch was inside the palace as the scene was playing out, only a few chiefs, leaders and youth representatives were allowed to enter the palace by the protesters.
Several meetings were held by groups who adjourned and  reconvened after some hours. The groups were  said to have also met   with the monarch.
Atunwatse II  had few days ago declared in a document titled  “The New Order of Iwere Kingdom,” that the “Ogiame” title which had been in existence for over 500 years would cease to exist following the recent consecration of the kingdom to God.
“Ogiame” means “King of the River,” according to the history behind the Itsekiri throne.
The monarch, in the document, said he had renounced his allegiance to the “Umalokun” (goddess of the sea), land and sky as well as  the “Ogiame” title to which his ancestors had pledged allegiance to “Umalokun” and other deities.
Source: Punch