Obafemi Awolowo: Hero Of Yoruba, Killer Of Biafra, Betrayed By The North By Obinna Akukwe 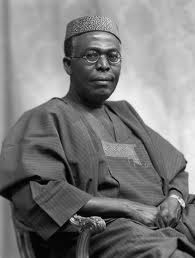 Obafemi Awolowo is the undisputed hero of the Yoruba tribe of Nigeria whose wartime policy of starvation and currency change helped kill the Biafran dream. The post colonial era of Nigerian history was dominated by three actors, Nnamdi Azikiwe, Obafemi Awolowo and Ahmadu Bello. Dr Azikiwe was an avowed nationalist who preferred one Nigeria above anything else. Sir Ahmadu Bello was a tribalist who initially preferred a balkanized Nigeria to enable his people live their religious and cultural life without external negative inluence and was later reluctantly convinced to seek an agenda for a united Nigeria. Chief Obafemi Awolowo from the onset did not hide his preference for an Oduduwa Republic.
Chief Awolowo is idolized by the Yorubas because he was able to transform the South West into an educational and industrial hub in Africa and build a robust political climate. He so much understood the value of education that he made it free, affordable and offered a lot of scholarships to Yorubas to advance academically to the highest level. He ran a political system in Action Group whereby people have their say while the leader has his way. This is the system Bola Tinubu is unsuccessfully trying to emulate in Action Congress of Nigeria.
Subscribe to our newsletter
Dr Nnamdi Azikiwe, a core nationalist, never received the level of hero worship Awolowo received in the South West because Igbos severally accuses him of not taking them out of Nigeria when Chief Awolowo and Sir Ahmadu Bello were angling for a balkanized nation. Chief Awolowo was the sage whose idea ended the Nigerian civil war. He advised the Gowon Cabinet to block all food supply to Biafra so as to end the war quickly and according to him ‘’ starvation is a legitimate instrument of war’’ This led to the starvation of over one million Biafran children. Thus Awolowo’s advice and actions led to the quick end to the Biafran dream. Therefore it is right to say that what the entire armed forces of Nigeria could not do, the wisdom of Awolowo did. Chief Awolowo convinced Gowon that every adult Biafran who managed to survive the starvation deserved only #20 pounds to start life afresh irrespective of economic status before the war, an action perceived as intended to further reduce the ability of Igbos to recover economically.
Another policy of his which frustrated Biafra’s ability to import food and arms was the change of currency which according to Awolowo ‘’ And it is on record that Ojukwu admitted that two things defeated him in this war, that’s as at the day he left Biafra. He said one, the change of currency, he said that was the first thing that defeated him, and we did that to prevent Ojukwu taking the money which his soldiers has stolen from our Central bank for sale abroad to buy arms…So I decided to change the currency, and for your benefit, it can now be told the whole world, only Gowon knew the day before, the day before the change took place’’.
Chief Awolowo has been variously accused of introducing tribalism into the Nigerian politics. He chased Dr Azikiwe out of the Ibadan in 1954 when the NCNC headed by Azikiwe won majority seats in the West Nigerian House of Assembly and through a palace coup called cross carpeting Zik was denied the Premiership of Western Nigeria, at a time when Professor Eyo Ita, an Efik was premier of Eastern Region and Alhaji Umoru Altine , a Fulani, was Mayor of Enugu. Dr Azikiwe, following the footsteps of Awolowo, had to frustrate Professor Eyo Ita out of Enugu. Chief Awolowo and Sir Ahmadu Bello seems to have a deeper understanding of the Nigerian complexities than Dr Azikiwe.
While Awolowo never trusted the Igbos, the north never trusted Awolowo and theYorubas. The northern oligarchy instigated crisis in Western Nigeria in the same manner President Obasanjo used the Uba brothers to instigate crisis in Anambra State. This crisis led to the trumped up charges leading to the trial and imprisonment of Awolowo . Reports has it that he was to be poisoned in prison before the military coup altered the state of affairs.

Awolowo was released from Calabar prison by Biafran leader Odumegwu Ojukwu and there was an agreement that while Ojukwu declares Biafra in the East, Awolowo would declare Oduduwa Republic in the West. The British establishment, sensing the dangers of Awolowo declaring Oduduwa Republic in the West, convinced Gowon and the north to checkmate Awolowo’s secessionist agenda by appointing him the Vice Chairman of Federal Executive Council. This strategy worked effectively and Awolowo was deceived that after Gowon’s tenure he would be given the opportunity of ruling Nigeria. Awolowo thus had to checkmate the Biafran dream to clear any obstacle to his ruling Nigeria while the north was looking for the right opportunity to throw him into the dustbin. In frustration, Awo resigned from Gowon’s cabinet when he realized he has been politically duped.
Awolowo quashed the Biafran dream while the northern establishment killed the Oduduwa dream and betrayed Awolowo’s presidential ambition thrice. This fact was aptly captured by a controversial  Yoruba activist and Nigeria’s former minister of aviation Chief Femi Fani-Kayode while replying to a boastful statement by another prominent northern leader, Alhaji Usman Farouk on how the north dominated the Yoruba people and conquered the Niger Delta. According to Fani Kayode, “… the north literally begged Awolowo not to declare Oduduwa Republic and go the way of Biafra even though that was his original intention…Fourthly it was the support that the south west gave to the north that allowed Nigeria to win the war. Fifthly it was the lie that Gowon and the northern leaders fed to Awolowo that he would be made President of the country after the war and after being effectively being made de facto Prime Minister under Gowon during the war that got Awolowo to support them”, invariably, the Igbos and Yorubas were effectively dribbled, divided, manipulated and overpowered.
The ascension of Awolowo’s kinsman Obasanjo as Head of State was another opportunity for him to realize his dream of ruling Nigeria. The 1979 election result was decided in the infamous judgement where the Supreme Court refused Awolowo’s plea that 2/3 of 19 is 13 states therefore declaring Alhaji Shehu Shagari the winner of the election. The north led by Generals Shehu Yaradua and Theophilus Danjuma convinced Obasanjo on why Awolowo should never be the president of Nigeria. Therefore, instead of a runoff election, which some believe could favour Awolowo,the Supreme Court declared Alhaji Shehu Shagari the winner.
Chief MKO Abiola at one point was used by the northern dominated NPN to oppose the presidential ambitions of Awolowo . He used his Nigerian Concord newspaper and enormous wealth to fight Awolowo and UPN and when they finished using him to deal with Awolowo, they frustrated Abiola’s presidential ambition and he had to resign from the party in 1982. Alhaji Umaru Dikko, then transport minister, sent message to Abiola that the presidency is not for sale to the highest bidder. When Babangida annulled the election of Abiola in 1993, Yorubas alluded to a certain curse Awolowo released on Abiola, in the heat of the later’s opposition to his presidency ‘’that even if Abiola was to be given the presidential seat, he would not sit on it.”
In 1999, after the suspicious death of Abiola, the northern establishment sensing that Chief Olu Falae was the choice of the Yoruba people, rigged the polls in favour of Obasanjo . It is obvious that the North had shown evidence of being deadly political strategists than their Yoruba and Igbo compatriots, having used the political suspicion between the duos to dribble them. Conclusively, the north is not as dumb as people assume; they used Awolowo to checkmate Biafra and then dealt with Awolowo and his ambitions.
Obinna Akukwe
[email protected]

Dumb Nigerian Youth … In Their Own Words By Bayo Oluwasanmi