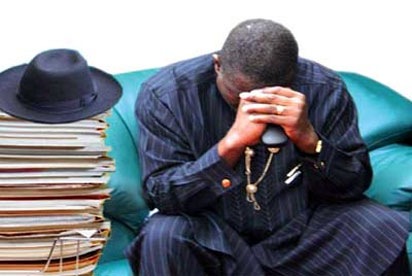 The Federal government Tuesday raised alarm that the lingering Boko Haram insurgency in some parts of the north where thousands of persons have been brutally killed and property worth millions of naira destroyed has damaged the reputation of the country.
The Federal government also warned that President Goodluck Jonathan must not be blamed by Nigerians for being responsible for the level of violence in the country against the backdrop that he has done everything humanly possible to nip in the bud the insurgency.
Subscribe to our newsletter
Speaking, when he appeared before the Bamanga Tukur led National Working Committee, NWC of the Peoples Democratic Party, PDP to give the scorecard of his Ministry, Minister of Information, Labaran Maku who noted that major critics of the President and the government were members of the PDP, however stressed that in the world over, reforming leaders and Presidents were not always popular at the beginning.
According to him, some of these party members whom he described as doubting Thomases do everything to pull down the government as they never see the government from the point of achievements being made in all sectors of the economy, adding that the size of the party could also be attributable to this as the size could also have its own value.
Labaran Maku who boasted that there was no alternative to PDP in terms of leadership quality and vision, said that the economy has really improved with the Gross Domestic Product, GDP put at 7 percent.
He however warned the International Monetary Fund (IMF) not to dictate for Nigeria, but should only advice the nation.
According to him, President Jonathan has created an enabling environment for the Independent National Electoral Commission, INEC to operate without any interference on the path of the government, adding that if the opposition were in power, INEC will not operate freely and independent the way it does at the moment.
Maku who stressed that the quality of governance depends on the quality of the party, however insisted that transparent election can only be guaranteed by the ruling party and this he said was what the opposition parties were enjoying today.
He warned stakeholders, who are outside the government not to fan the ember of discouragement, but should help the government to achieve its mandate, adding that PDP has laid the foundation for democracy and no government anywhere in the country has done what PDP led government has done in the last two years.

He however challenged all government appointees to be loyal to the party and federal government and that when government succeeds, the party has then succeeded.
Maku said, “A reforming President is never a popular President in the beginning until when the reform result begins to come out.
“Boko Haram has damaged the reputation of Nigeria. A report of a bomb explosion makes more news globally than commissioning of projects. We have been doing well in an atmosphere of negative reports. This government is the most documented in the Nigeria history.’’
Source:  Vanguard

Obafemi Awolowo: Hero Of Yoruba, Killer Of Biafra, Betrayed By The North By Obinna Akukwe

NGF: Amaechi, Jang May Be Asked To Step Down