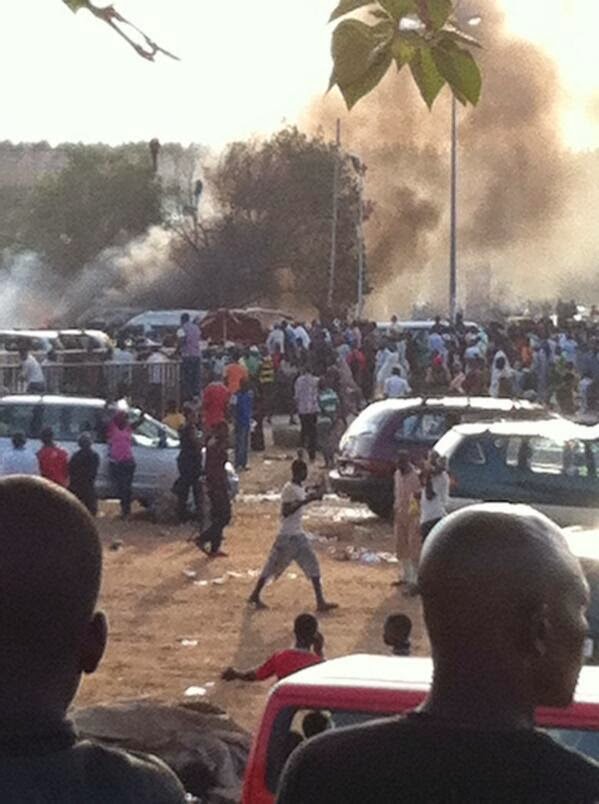 In a swift reaction to the Monday morning, 14th April, 2014 blast at a motor park in Nyanya, a suburb of about 30 kilometres from the Federal Capital Territory Abuja, the Inspector-General of Police, IGP MD Abubakar, CFR, NPM, mni, psc has visited the scene of the explosion where he assessed the extent of damage and the impact on the surrounding environment. He urged the citizens and the international community to remain calm and vigilant as the Police and other security agencies are stepping up measures to uncover the authors of the crime and avoid a reoccurrence of this unfortunate incident.
The IGP further noted that security agents have relentlessly worked round the clock with significant success to stave off such attacks on the Federal Capital and the entire country at large and therefore reassured Nigerians and foreign nationals that security agencies will do anything possible to further strengthen the security within and beyond Federal Capital Territory (FCT). Consequently, the IGP has placed Police operatives on red alert. He has equally ordered the Police to intensify surveillance on all vulnerable targets within Abuja.
Meanwhile, the Police, supported by other law enforcement agencies, have commenced a full-scale investigation into the incident with the deployment of the Police Anti-Bomb Squad and other detectives to the scene with the view to solving the crime.

Regrettably, seventy-one (71) persons have been confirmed dead while one hundred and twenty-four (124) persons sustained various degrees of injuries.
While commiserating with the families of the victims of the blasts, the IGP called on the members of the public to go about their normal businesses without fear and to cooperate with the Police by providing useful information in order to ensure that the perpetrators of this dastardly act are brought to book.
CSP FRANK E. MBA
FORCE PUBLIC RELATIONS OFFICER,
FORCE HEADQUARTERS,
ABUJA

Insecurity And Indecisiveness; The Madening Race Down The Hill To Self Destruction; By Jaye Gaskia; 14/04/14