Insecurity And Indecisiveness; The Madening Race Down The Hill To Self Destruction; By Jaye Gaskia; 14/04/14 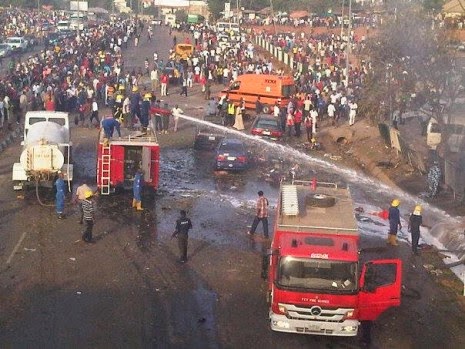 We are indeed living in perilous times, a season of anomie, where life has become truly brief, short and brutish, and where not even the fittest can be sure of survival. This is the condition that best describes our existence in Nigeria at this moment.
Violent crimes and irrational insurgencies have taken over the land. We have become a people buffeted by violence driven by the rabid hatred of the alienated for society, sponsored by highly placed and connected members of our treacherous ruling elites.
Subscribe to our newsletter
Let us be very clear about this, there has been no incidence running organized violence in whatever form, either as criminal acts of kidnapping, armed robbery, or crude oil theft; nor of insurgency, has been initiated without the active mobilization, organization and sponsorship of different fractions of the treasury looting elites in their antagonistic competitive drive towards primitive accumulation.
Every enquiry into sustained violent onslaughts on the Nigerian people and state has indicted some members of the elite. The problem however is that no consistent and deterrent action has been undertaken against the indicted members of the ruling class sufficient to mitigate and curb their propensity to arm the hapless poor in their struggle for control of state power in order to gain unfettered access to our public treasury.
The same impunity that drives corruption and treasury looting also drives the competitive arming of alienated and impoverished citizens against one another.
For the avoidance of doubt, it does appear as if a sustained war of attrition and annihilation has been launched and is being waged against the poor, exploited, and oppressed subordinate classes and strata of our population by the rich. It does seem that there is an orchestrated campaign of extermination against the 70% of impoverished Nigerians, by the 10% of Nigerians who own and control 40% of National wealth; a status achieved through pillage and brigandage.
In the last five years, and certainly in the last decade alone, their have been at least two commissions of inquiry on the Boko Haram Insurgency, as well as other commissions on post election violence, and on the various inter-communal and intra-communal conflicts that have ravaged the country. Each of these commissions of enquiry, sat diligently, and produced reports with far reaching recommendations; each of these reports were dutifully submitted to the authorities; and almost nothing has been done to implement these reports.

Here lies the bane of our problem, the continued pretence in high places that the situation will blow over of its own accord; combined with a mindset that accepts mass murder and routine massacres of even children, as appropriate collateral damage not only by perpetrators of violence, but also by the state and its functionaries in high and low places.
We demand that the reports of all extant commissions of enquiry into the Boko Haram insurgency, into the Fulani herdsmen and farmers conflicts, into political violence, be dusted up and implemented immediately. If people in government have n o skeletons in their cupboards, the time to act is now, not tomorrow, and certainly not after the elections.
Tackling this menace which has now become a low intensity warfare, with more than 2,000 Nigerians murdered since January requires political will, matched by a combination of approaches; responses which must include better organized and coordinated military action, but which must also go beyond this to include building relationships of active equitable collaboration based on trust and confidence with affected communities in order to isolate the insurgents; addressing the developmental challenges that have created the massive impoverisation of citizens and excluded them from access to basic social services, based on an emergency development intervention plan of action; as well as improved intelligence gathering capability and coordination among security and armed forces.
This concerted long drawn war on the poor must come to an end; and we are very clear about where to place responsibility for the war and the war crimes being waged and committed against the poor. The responsibility lies squarely with the ruling political elites in general, and with the political elites in control of Local, State and Federal governments.
Enough Is Enough. How many more lives must be lost before those who claim they have our mandate to in the words of the constitution provision the security and welfare of citizens, take concrete action to fulfill their constitutional obligations to us?
Time is fast running out.
Follow me on Twitter: @jayegaskia & [DPSR]protesttopower; Interact with me on FaceBook; Jaye Gaskia & Take Back Nigeria