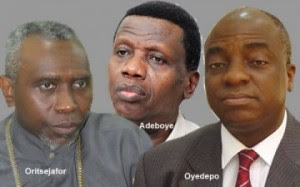 Nigerian politicians have carried their blatant disrespect for God and godly behavior to Prayer Camps, Adoration Grounds and Redemption Camps where they constantly desecrate the hallowed environment. Many prayer camps abound in Nigeria including Alone With God Prayer Camp, Abuja, Scripture Union Camp of Faith Okigwe which serves clerics cutting across denominations in the South East and South South. There is Adoration Ground in Emene, Enugu managed by Rev Fr Ejike Mbaka, Adoration Ground in Uke, Anambra State managed by Rev Fr Emmanuel Obinma popularly called ( Ebube Muonso), Upper Room Ministries of late Rev Fr Njoku  in  Emene, Enugu. Bishop Oyedepo manages Canaan Land, Pastor Kumuyi controls Deeper Life Camp Ground , Pastor Odukoya controls Mountain of Fire  Prayer City, Pastor Adeboye  controls Redemption Camp all within Lagos- Shagamu expressway. These prayer camps were established to enable Christians seek the face of God in matters of holiness, dedication, repentance, prosperity, healing, deliverance and even national rebirth, and these aforementioned camps have some doses of presence of God in their activities.
Subscribe to our newsletter
Redemption Camp is the biggest prayer camp in Africa. There is no doubt for any spiritually discerning observer that the Redemption Camp carries some doses of the Presence of God especially during Holy Ghost Congress, Holy Ghost Service etc. Many Nigerians throng to the camp to seek a conducive environment to communicate with God away from the distractions of city life and busy schedule. The same environment had also attracted many troubled politicians including former president Obasanjo who ran to the place when Pastor Tunde Bakare prophesied that his Ota born head will be severed by Nigerian coup plotters before May 1999 in a widely reported controversial prophecy. Reports have it that he also visited the camp later on in his presidency.
This Redeemed Camp has been troubled by those who troubles Nigeria including looters of public treasury, riggers of elections, political liars, economic kidnappers and perpetrators of social and political injustice. They also came to seek the face of God to continue with their acts of evil against the Nigerian people. Their activities would have gone unnoticed until Nigeria’s President Jonathan went to the camp and knelt before Pastor Adeboye in show of strange humility meant to achieve electoral advantage. At the end of the day, many Christians voted for Jonathan because he knelt before Baba Adeboye. Two years later, when his popularity dwindled due to draconian economic policies, mountain corruption and removal of fuel subsidy, Nigeria’s President Jonathan ran to the Camp again, mounted the podium and reeled lies and deceits that he has not made up his mind to re-contest for re-election in 2015, when his close friends have already told many Nigerians that nothing will stop their man in 2015. Barely three weeks after lying at the Redeemed Camp, he unleashed mayhem on his Rivers State kinsman, Rotimi Amechi, and his supporters for daring to have interest in the same presidency he is ‘YET’ to decide on.
Holy Ghost Adoration Ground, Uke, in Anambra State is another popular camp which receives hordes of visitors. Many Catholics have found solace in that place managed by Rev Fr Obinma and God had also met them there in one way or the other. That ground has been a source of succor to lots of Anambrarians under the groan of imbecile leadership for many years that they have to resort to God and Fr Emmanuel Obinma for spiritual solutions to man-made malfeasance due to societal maladministration. It was in such state where God is being solicited to deliver the people from kidnappers, robbers, unemployment, diseases etc. that Governor Peter Obi of Anambra State, Party Chairman, Victor Umeh, and APGA Gubernatorial Flag bearer, Willy Obiano, among others, invaded the solemn arena, and turned it into a campaign arena where they wanted to woo some of the adherents of the prayer ground in the same manner President Jonathan swooped on Redemption Camp to woo voters.
Unlike the Redemption Camp where the worshipers were excited that President Jonathan knelt before their General Overseer, the Adoration worshipers where not impressed with the presence of Governor Peter Obi in their hallowed ground. They booed, murmured and hissed as he spoke to them. They detested any political presence while they are trying to locate God. Governor Obi and his team later knelt down for prayers the same manner Jonathan knelt before Adeboye yet the worshipers were not impressed. By the time the governor and his team of politicians left, they have desecrated the place so much that death soon followed in their trails.

Thirty Five Roman Catholics, under the Pontificate of poor people loving Pope Francis were trampled by agents of wealthy, looting politicians because they went to seek God in a prayer Camp. This is because politicians have desecrated prayer grounds sometimes with the connivance of the clerics while in some other cases they used and dumped the clerics without their knowledge.  In the case of Redeemed Camp, nobody died physically, but many RCCG fans constantly die emotionally, politically, psychologically whenever occult, corrupt, looting, insensitive and wicked politicians are given undue attention in the place. After the 2012 political campaign at the Redemption Camp, one of Adeboye’s pastors, Bankole, a lawyer and human rights activist resigned from the pastorate in protest over the desecration of the Camp Hallowed Podium by corrupt politicians.
The Uke tragedy is a divine sign that ‘whosoever breaks the hedge, the serpent will bite’. Whatsoever caused their death; this is the first time death is being recorded on that ground. These politicians have desecrated the holy ground at Uke, and instead of apologizing, they are playing politics with it. The clergy cannot avoid the blame for whatsoever happens in that Camp. Governor Peter Obi, Presidents Goodluck Jonathan, Boko Haram Warlord Malam Shekau, Prime Minister Robert Mugabe, Senator Bola Tinubu, General Buhari and others have the right to visit prayer camps. While in such camps, they should be in prayer mood like other worshipers, and apart from official protocols of recognition, they might, at most, be only allowed to greet the church and should be more involved in repenting of their acts of mis-governance which they visited on defenseless Nigerians, instead of hypocritical sermonization and political campaigning.
Nigerian politicians have added in their trails of looting, thieving, lying, murder, assassinations, kidnapping and insensitivity, another vice; desecration of camp ground and insulting the spiritual sensibilities of innocent Nigerians-very soon the original owner of these prayer ground would go on rampage and there may be nowhere to hide for those who aid and abet the desecration of spiritual places of succor.
Obinna Akukwe
[email protected]