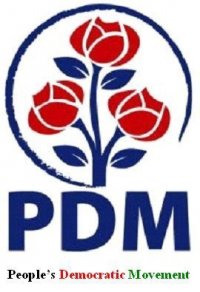 In the last decade, Nigeria has witnessed an unprecedented decline in its social, economic and political fortunes. The recent lingering political and security crisis has magnified the cleavages in the nation’s multi-ethnic society and pushed our national psyche into a state of confusion, uncertainty and helplessness. The nation is now faced with a rapidly deteriorating situation of human deprivation and economic stagnation which is threatening the nation with an ultimate structural collapse. This needs not be the plight of Nigeria and the Nigerian people because our nation is endowed with a large, quality population, abundant natural resources and a unique geo-economic location. Recognising that it is no longer sufficient to dream good dreams about a great Nigeria, we, members of the Peoples Democratic Movement are conscious of the need for basic attitudinal reorientation towards the preservation of the unity of this nation and the restoration of self-esteem, patriotism and sense of national purpose among the people of Nigeria.
Subscribe to our newsletter
This consciousness presents us with a only one option: to find lasting solutions to the mounting social, economic and political problems of our country through the institutionalization of a democratic culture that guarantees the rule of law, public accountability and the legitimacy of dissent. We must also come to terms with the problem of evolving a durable civic culture that believes in the dignity and autonomy of the human person and his individual rights; a civic culture that promotes trust, tolerance, consensus through accommodation and compromise, equity and justice; a culture that engenders a public spirit and a positive commitment to people as legitimate partners in national development. Pursuant to the above, and based on our appreciation of the history of other modern nations, we have come to accept the following: a. That the nature, rate and direction of development of any nation is determined primarily by the people and not by capital or material resources alone. In other words, people constitute the ultimate basis for a nation’s wealth. We are convinced that a nation that fails to develop its people cannot develop anything else;
b. That real development or nation-building is nothing else but the actualization of the creative capacity of the citizens of any nation to transform available natural resources of that nation into valuable goods and services. This has to be done through the application of the creative talents and the labor power of citizens as a whole. This has been the only tested way to achieve and sustain self-reliance and development;
c. That the enabling environment for national development must be on the basis of  National Unity, the Rule of Law, Democracy and Human Rights; and,
d. That for any social order to be viable and enduring, it must meet the following basic goals:
i. It must consistently provide social justice and cater for the genuine welfare for the people. In this context, the principle of social justice is that which ensures equitable distribution of responsibilities and benefits and allocate reward  according to productivity;
ii. It must ensure total involvement of all citizens in the structure and organization of power and in the decision making processes regardless of their social status or political persuasions. That is, it must be characterized by an enabling environment suitable for nurturing of democratic attitudes, freedom of thought and expression, legitimacy of dissent and the sacredness of electoral process;
iii. It must ensure the promotion of national unity by reducing social tension, mistrust, ethnic marginalization, religious intolerance and nepotism;

iv. It must promote the productivity of labor and assure equitable income under a just reward system;
v. It must strive towards a national disposition that can defend national interests and command international respect.
PDM is, therefore, an association of Nigerians who have agreed, based on the above fundamental imperatives, to pursue a set of objectives that will guarantee the following: a. That economic and political power are genuinely democratized through political grassroot participation in the structures and organization of power. In other words, sovereignty, in all its ramifications, belongs to the people alone; b. That leadership will be sought through a rational arrangement which will be informed by the common good and sustained by the popular will of the people; c. That leaders must live by example through personal integrity, honesty, sincerity and commitment to fair play in the service of the people; d. That a new political order is established which will compel the leadership to always balance power and authority with service and accountability. The system will thus guarantee social justice, equality of opportunities, national loyalty and patriotism;
f. That all economic policies are directed towards national self-reliance which is the cornerstone of genuine development and nation-building;;
g. That all efforts will be made to stamp out all anti social behavior such as corruption, terrorism, indiscipline, lack of national commitment and avarice. h. An incentive structure which will promote and reward productivity and discourage indolence is
Based on the enumerated principles and determined will of our members, the PDM has a common vision of hope; the hope that the Nigerian State can still be developed into a modern nation; a nation that will posses real capability to harness her natural resources for the upliftment of the welfare of her people; a nation that will be just, peaceful and politically stable; a nation which will be capable of defending her interests anywhere and everywhere and command international respect; a nation in which all citizens will have the opportunity to lead useful and satisfactory lives.
This is our mission.
So help us God.

We Are Set To Kick PDP Out –Kanti Bello