We Are Set To Kick PDP Out –Kanti Bello 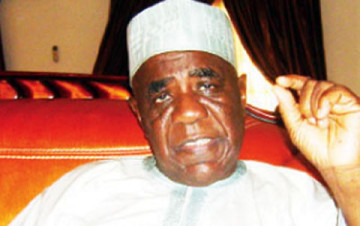 Is the opposition not too focused on the PDP that it looks like they are afraid of the party?
No! We are not afraid. First, PDP is a party, they have the power to give contracts and the worse of it all is that they control all the resources. This is bad, our education system and every other sector is nothing to be reckoned with anymore. PDP controls everything and they would not give other parties a chance. PDP is holding us all in Nigeria by the sword. We can’t do anything. We need to come together to push the PDP out of the system; this is our position. It is not a question of being afraid. Being afraid of PDP is actually the beginning of wisdom. It is because they control everything, resources and so on. So, every right-thinking or good Nigerian, whether you are in the APC or even APGA, it does not matter; everyone should please join hands together and salvage this nation. The coalition is a means to salvage Nigeria and this is our major mission. Please, let Nigerians be prepared to kick out these people who are frustrating this country. Every Nigerian, whether an opposition or even an onlooker, should join hands to save this country.
Nigerians seem happy with the registration of the APC to counter the PDP, there is the fear as to which of the merged parties would produce the presidential flag bearer. What is your take on this?
We know that there are moles within the larger groups who want to destabilise everything. There are also good fellows who are really with sincerity and who want to salvage this nation. The coalition parties agreed legitimately and we do not restrain anybody from contesting but there are laid down rules and regulations. Right now, I am aware that there is a draft constitution in the APC, which I have read and the good thing in it is that whatever you are going to become, you have to be elected. There would be primaries, even for the councillorship; it is in the constitution of the APC. There must be vote for any person that would be chosen or elected. We are going to strictly adhere to the constitution of the party and the rule of law because if we want things to change in this country, we must agree to practise the rule of law. Once we try to keep to the rule of law, then, the system will work.
As a potential governor, what is your opinion on the disagreement in the Nigerian Governors’ Forum (NGF)?
Who are those that didn’t agree to the outcome of the election, was it not PDP? Look, this is the culture of PDP, the culture of impunity. PDP has a culture of rigging and impunity as well as electoral corruption. They have to go, the party is a disgrace to this country and it must go.
If you had the chance to speak to Nigerians regarding the 2015 general election, what would you tell them?
Nigerians should know that the struggle is yet to begin. They should bear with us and help us and they should pray for this merger to work. The people should pray that leaders with good hearts and those who are patriotic that want to move this country forward should rule this nation, so that the nation, our children and grand children can have a future to look up to and this can be achieved under a vibrant and united APC. And I appeal to members of the APC who have all come to merge that they should not try to discourage young Nigerians under any circumstances. Nigerians should pray for us because we are a new party; we are also bound to make mistakes. Our goal and mission in this party is to help make this country a better one. And I feel some good people should come together and save this country. That is the reason I said I will leave PDP and I left. And then I had to look for a party that I think will move this country forward so that we can come together as a party. Naturally, our people do not like PDP so I joined CPC. Of course, when I joined CPC I met some people whom we used to be together at one time or the other in ANPP and some of them were so bitter that I was there. It’s good that they were bitter because at the end of the day, they realised I was there for a mission and no amount of funny steps was going to stop Senator Kanti Bello from achieving his plan for the masses. It is not about me but about the people of Katsina and I am grateful to them. So I joined CPC with the hope that we were going to merge and now that we have merged, we are set to kick out PDP.
Source: Daily Independent