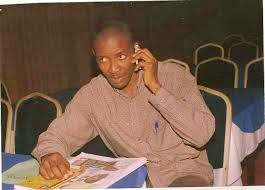 Senior police officers of the force Headquarters Abuja stormed Owerri the Imo State Capital on the 24/7/14 and presented a letter from the Inspector General of Police to the Imo Police Commissioner Mr Abdulmajid Ali officially demanding the transfer of the case of murder which the Imo Police Command claimed involved Activist Samuelson Iwuoha and his wife. The transfer had effect from the 24th of July 2014.
But rather than release the social crusader and his wife to the Abuja visitors, the Police Commissioner simply gave them reasons and excuses that since he was not informed on time about the transfer, that he should be giving some time to tidy up the reports on the case files and that he will signal them when ready. He also informed them that Gov Okorocha and Mr Benjamin Uwajumogu (Imo Speaker)  are involved in the matter.
The Commissioner of Police immediately called the Imo State Police Deputy Commissioner Mr D.O. Folawiyo and the IPO (Mr Obi) and informed them of the development. They quickly contacted Government House and informed them for they have been compromised on the issue.
Governor Okorocha on learning of the development quickly dispatched his ADC – Mr. Eberendu to see the Deputy Commissioner of Police.
Shortly after, an order came that Samuelson should not be allowed to see visitors and his relations who throng daily to see him. Also policemen stormed his cell to search him to see if they would find any writing materials around the activist.

The Deputy Commissioner was later seen discussing with other policemen saying that they had been ordered by the Governor to find a way to indict Samuelson in the murder case, that allowing Samuelson to move to Abuja would expose them the more.
Meanwhile, Samuelson’s wife is the only one authorized to see visitors and relations. Food given to her and her husband ends up at her own cell, for she is not permitted to go to the male cell where her husband stays. Policemen on duty always take the husbands ration to him, but Citizen Ikenna Samuelson sensing danger of food poisoning from the officers has refused to eat since 24th June 2014.
It is very obvious that Samuelsson’s life is in danger. They want him dead so that the truth of the murder of Late Arch. Franklin Okoli would not be known. They want him dead so that the 5 young men who murdered Franklin Okoli would be free to move about. They want him dead so that the EFCC petition written by Samuelson exposing the fraudulent activities of Speaker Benjamin Uwajumogu would not be investigated.
The question is; why would the Imo Police Command reject orders from Force Headquarters to Hand over Samuelson and his wife to Senior Police Officers from Abuja. Why should the Imo Police Command take orders from Okorocha and Uwajumogu who are interested parties in the murder case? Could it be that the Imo Police are truly hiding something from the public?
Samuelson must not be killed under false pretence. Samuelson must not be poisoned under any guise. The action of Imo police is very suspicious and self-indicting. Let the case be investigated on a neutral ground. Imo people are watching
Emma Jackson reporting for Imo Initiative