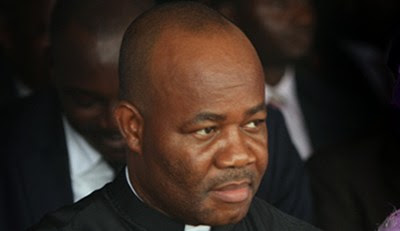 The Akwa Ibom State governor, Chief Godswill Obot Akpabio, may have been barred from the Presidential Villa, Aso Rock, over what insiders refer to as his “poor comportment and misbehaviour” inside the seat of the Nigerian federal government.
During a recent visit to the Aso Rock Villa, the governor of the oil-rich state and Chairman of the Peoples Democratic Party (PDP) Governors’ Forum was said to have distributed large sums of dollars to security men and presidential aides who were on duty inside the Villa, which got to the knowledge of the President.
Subscribe to our newsletter
The seemingly corrupt influences of Gov. Akpabio may have prompted the decision of the President, Dr. Goodluck Ebeble Jonathan, to bar him from the villa as Akpabio is said to be in the corrupt habit of sharing thousands of dollars to staff of the presidential villa during his visits so much so that staff of the villa always look forward to his visit and sometimes, hang around the premises even when they would have completed their shift in anticipation of Akpabio’s dollar rain!
Unaware of the President’s stance over his reckless behaviour, Akpabio recently paid another unscheduled visit to Aso Rock and was expecting the usual red carpet reception from the staff, but to his shock was denied entry and had to turn back with his entourage in shame.
The security details acting on “orders from above” refused to open the gate for him and asked him instead to go back to avoid further embarrassment .
The governor’s attempt to speak with the Nigerian First Lady, Dame Patience Jonathan, over the issue resulted in further rebuff as the first Lady in her characteristic bluntness told Akpabio who has made Abuja his second home to go back to Uyo and exercise his mandate of governing Akwa Ibom state instead of turning himself into a nuisance in Abuja.

Lately, Godswill Akpabio has acquired the reputation of an “unserious governor” who is always giving away hefty sums of state resources for flimsy reasons. His sponsorship of singer Tuface Idibia’s marriage to Annie Macauley, an indigene of Akwa Ibom state in faraway Dubai also earned him the nickname of “Donatus”.
Recently also, Akpabio’s gift of N50 million to the country movie industry, known as Nollywood, among several other donations seems not to have gone down well with some indigenes of the state who are wallowing in poverty over unpaid salary.
Residents of Uyo have also accused Akpabio of abandoning Akwa Ibom state, a state he fought so hard to govern especially during his campaign for re-election for Abuja, where he is said to be operating from.
“Our Governor now lives in Abuja and does not seem to care about whatever happens here. He only parachutes in to commission projects or declare open seminars and workshops and thereafter goes back to Abuja”, volunteered a senior party official who would not want his name in print.
His very frequent visits to the Presidential villa and his unruly behaviour were said to be giving President Goodluck Jonathan some serious concerns, and may have informed Jonathan’s decision to restrict his visit to the Villa. For now, Akpabio, a PDP poster boy is at some crossroads over the turn of events.
Source: 247ureports