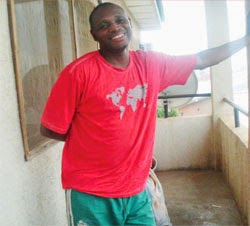 One time Flying Eagles Star and Winner of the then FIFA  under 21 world cup, Peter Ogaba is now battling with an Estate Agent over the Two Bedroom Flat donated to him by the Federal Government after the Flying Eagles came second in the  FIFA Under 21 world cup in USSR now Russia 1989.
The high octane scandal threatening the integrity of the one time champion is not unconnected with the house located at No. U2 Wulko Quarters North Bank Makurdi donated by the Federal Government through the Benue State Housing Agency shortly after the victory.
Subscribe to our newsletter
According to a family source Peter Ogaba three weeks back sold the Two Bedroom Flat for paltry sum of N2.5 million without the knowledge and his other siblings who were tenants in the Two Bedroom Flat.

Last week the new owner of the house stormed the house and threw the family out of the building.  As at the time of going to the Press Ada Ogaba, the mother of Peter Ogaba has been left in the rain with all her property.
But in  a dramatic turn of events the new owner name withheld, a prominent Politician in Benue State after realizing that the occupants were Peter Ogaba’s helpless mother and siblings has initiated moves to recover his money as according to our usually reliable source. He wants to distance himself from the scandal.
Peter Ogaba who has been hibernating in Abuja, Nigeria’s Federal Capital claiming to be a FIFA Licensed agent might have gone underground following the threats from the politician.
Efforts to reach Peter Ogaba through his mobile phone proved abortive, as his phone was switched off.