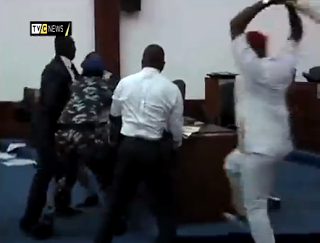 “Section 100(1-5) further espouses the powers of the Assembly to make laws. Thus in line with the above provisions the Rivers State House of Assembly enacted the Local Government Law of Rivers State No.2 of 2012. Section 64 sub-section (1)-(4) of the Local Government Law of Rivers State No.2 of 2012 gives the power of suspension of Local Government Council to the Assembly.”
The lawmakers also said that; “In compliance with the above provisions, when the question was put on the interim report on the committee on local government on the issue. 23 members voted for the suspension and 5 members voted against.”
“In compliance with our legislative duties, we have had cause to vote on motions, bills and resolutions that have impacted positively on the citizens of Rivers state, and if a tiny minority of 5 out of 32 members have dissenting views, that does not impugn on the views of the majority.”
According to them they said their support willcontinue to be for the Speaker Amachree and the governor Rotimi Amaechi; “We shall continue to support our amiable governor Rt. Hon. Chibuike Rotimi Amaechi and his people-friendly policies aimed at lifting our state from the shackles of a small political militia desirous of lording over and looting the treasury of our dear state.”.
“We totally dissociate ourselves from the second team of Police Officers led by a commissioner of police and Senator George T. Sekibo,” said the lawmakers.
“We reassure our constituents that we shall continue to support and fight for the truth and defend the constitution of the Federal Republic of Nigeria which we swore to uphold. We shall remain resolute in our resolve to defend our state from political predators scavenging for cheap popularity and a harvest of political fortunes.”
The lawmakers who signed the statement are Golden Ngozi Chioma; Innocent B. Barikor; Josiah John Olu; Ibiso Nwuche; Belema Okpokiri; Legbosi Nwidadah; Andrew Anderson Miller; Augustine Ngo; Ben Horsfall; Okechukwu Nwaogu; Victor Amadi; Azubike Chikere Wanjoku and Victoria Nyeche.
Others are Benibo Anabraba; Irene Inimgba; Felicia Barizasi-Tane; Aye Atamah Pepple; Onari Brown; Gift Wokocha; Ewor Nname Robinson; Lucky Odili; Chidi Julius Lloyd; Chigbo Eligwe; Leyii Kwanee; Tonye Harry and Mr. Amachree.