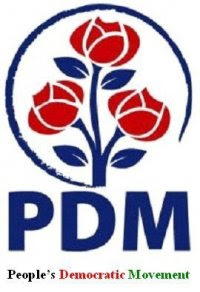 Former Deputy National Chairman of the Peoples Democratic Party, PDP, Alhaji Shuaib Oyedokun, ex- Minister of State, Foreign Affairs, Chief Dubem Onyia, Senator Ifeanyi Ararume and   zonal leaders of Peoples Democratic Movement, PDM   yesterday disowned the body as a new party.
According to them, they remained members of PDM as a pressure group within the Peoples Democratic Party, PDP and not as a political party.
Subscribe to our newsletter
This is coming barely   a week after PDM was registered as a political party by the Independent National Electoral Commission, INEC.
Rising from   an  expanded meeting held on Thursday in Abuja, the leaders and stakeholders of PDM under  the chairmanship of Senator Abubakar Mahdi stressed that they were   dismayed  with the way and manner in which the Movement was secretly converted into a political party against the original vision of its founding fathers.
The new party is being administered by an interim National Chairman, Alhaji Bashir Yusuf Ibrahim.
The position of the leaders of PDM was contained in a   communiqué signed and   issued   at the end of the meeting by eight leaders, namely Senator Abubakar Mahdi (Chairman), Senator Ifeanyi Araraume (South-East leader), Alhaji Abdullahi Abdulkadir Mohammed (North-West leader), Chief Ejiofor Onyia (South/South leader), Kabiru Bawa (North-East), Dr. Bala Ahmed Tafida (North Central leader), Alhaji Shuaib Oyedokun, Alhaji Shuaibu Abdullahi   and Chief Oluponnle Ebo.

The communiqué reads,
“ An expanded meeting of the PDM (movement not party) was called on 22nd day of August, 2013 by the Chairman, Senator Abubakar Mahdi to brief members on the registration of the movement as a political party.
“In attendance were the secretary Chief Dubem Onyia, Director of Finance, Shuaib Abdullahi and Zonal Leaders of the movement.
“In their reaction, the Zonal Leaders observed with dismay the way and manner in which PDM was secretly converted into a  political party against the original vision of its founding fathers.
“A  situation where founding fathers, National Caucus, Zonal Leaders and State Management Committees were not consulted is unacceptable.
“The Zonal leaders therefore, resolved that they are also not part of the registered party as they remain members of PDM as a pressure group within PDP.
“They wish to further reassure PDM members across the country that the vision of the founding fathers should not and would not be compromised without consultation and their consent.”
Former Vice President Atiku Abubakar, who is one of the leaders of the PDM had last stressed that   he had no hands in the registration of the party and that he remained a member of the PDP.
Source: Vanguard