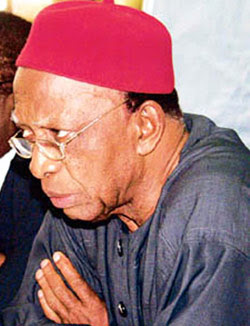 Elder statesman, Prof. Ben Nwabueze has said his position that President Goodluck Jonathan should not contest for the 2015 presidency was irrelevant.
In a statement he issued yesterday, Nwabueze said that that the purpose of the National Political Summit holding next week in Uyo, Akwa Ibom State was not to take a decision to stop President Jonathan from seeking re-election.
Subscribe to our newsletter
He said: “This is very far from the truth. The purpose of the summit is to agree on a roadmap to stability, progress and unity of Nigeria. The entire aim of the summit is to build national consensus on how to save Nigeria.
As I said in my interview with the press yesterday (Thursday), after The Patriots’ meeting with President Jonathan, the president is perfectly eligible to seek re-election in 2015 and he is free to do so. It is a matter in his absolute discretion to decide whether to run or not to run in 2015.

My position in this matter is totally irrelevant. Therefore, my personal advice to him not to run is only one factor that he should take into account in deciding for himself whether to run or not to run.
My advice is purely a personal one and not that of either the Patriots or Project Nigeria; (organizers of the National Summit) and has nothing to do with the Uyo summit as the question of election is not also a matter listed on the agenda of the summit.”
Source: Leadership