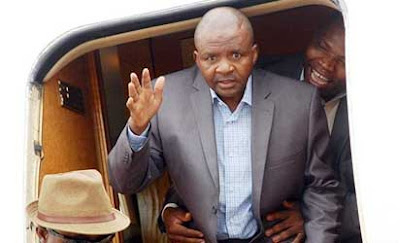 Peace appears to be in the horizon in crisis torn Taraba State which is currently locked down in a bitter struggle for power between Governor Danbaba Suntai and his deputy,Alhaji Garba Umar.
Playing the peacemakers are President Goodluck Jonathan, the national leadership of the Peoples Democratic Party (PDP) and other stakeholders led by a retired army general from the Middle Belt.
Subscribe to our newsletter
Deputy Governor Garba Umar, State Assembly Speaker Haruna Tsokwa and wife of the governor, Hajiya Hauwa Suntai, departed Jalingo yesterday for Abuja for peace talks.
They are scheduled to discuss today on the sideline of the PDP Special National Convention.
Sources said yesterday that the dialogue is at the instance of the President and the PDP leadership,following their realisation of the damage which the crisis could inflict of the party’s chances in the state in the 2015 elections.
At least 16 of the 24 members of the Assembly, including Speaker Tsokwa, want the deputy governor to continue in office as acting governor.They believe the governor is not yet fit to perform his constitutional duties and should, therefore, return to the United States of America to complete his rehabilitation.
The majority of members of the dissolved state cabinet and other political appointees are rooting for the governor to resume work.
Suntai had, through his Senior Special Assistant Sylvanus Giwa on Wednesday, announced the dissolution of the executive and the appointment of a new Secretary to the State Government (SSG) and Chief of Staff.
But the deputy governor dismissed the statement saying: “It is not a directive that was given by the Executive Governor, His Excellency, Governor Danbaba Suntai.”
More confusion flowed from the state Assembly after the Speaker said the legislators found that the governor was yet to fully recover from the injuries he suffered during his plane crash last year in Yola.
The governor’s return has also divided Tarabans.
PDP has 22 of the 24 legislators while the remaining two were elected on the platform of the defunct CPC.
Speaker Tsokwa is believed to be working for the deputy governor to be made substantive governor, with an eye on 2015.
Tsokwa became Speaker following the impeachment of Mr. Istifanus Haruna Gbana, an ally of Suntai.
Suntai’s loyalists accuse Umar of getting desperate to usurp his boss.

However, the deputy governor insists that a “cabal”, not Suntai, is trying to hijack powere for itself.
“The announcement of cabinet dissolution is a mere attempt by a cabal to hijack the machinery of governance in the state and not a directive that was given by the executive governor (Suntai)”, he said on Thursday.
Suntai’s camp says should Umar succeed in becoming governor, Speaker Tsokwa will likely be his deputy.
The House Majority Leader, Hon. Joseph Albasu, and seven others are backing Suntai.
Albasu accused the Speaker of misinterpreting the law.
All the commissioners sacked by Suntai have already handed over the affairs of their ministries to the permanent secretaries.
“Who am I to resist sack from the governor who appointed me. I have since handed over to my Permanent Secretary. This means I am no longer a government official?”, one of the commissioners said yesterday.
The Head of Service, Augustine Bazing, also held a meeting with the permanent secretaries yesterday, telling them to forward their memos to Governor Suntai.
Umar, on Thursday, told banks that government’s financial transactions should be honoured only if they are in tandem with the provisions of the law.
“The instruments must contain verifiable signature of the Executive Governor of Taraba, Danbaba Suntai and verifiable signature of Alhaji Garba Umar, the Acting Governor of Taraba State,’’ he said.
It was learnt that over N23 billion is in the state’s treasury.
There were 13 commissioners –appointed by Suntai. Five of them were sacked by the deputy governor over alleged embezzlement of N400 flood relief funds. One of them – Mustapha Hammangabdo, who was manning the Ministry of Health, resigned before the deputy governor’s sack.
Also, four out of the 22 Special Advisers were removed by Umar. The remaining 18 Advisers sacked by Suntai also said they recognized only Suntai as the chief executive of the state.
Umar yesterday held a security meeting in the Government House’s Exco Chambers before leaving for Abuja. But it was gathered that the new SSG, GT Kataps, and Chief of Staff, Aminu Jika, refused to attend the meeting which lasted for only three minutes.
Source: The Nation