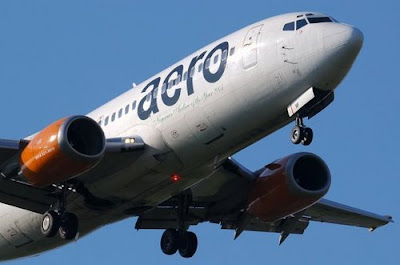 Passengers were Friday thrown into confusion aboard an Aero Contractors aircraft scheduled to take-off from Lagos to Benin as one of the female passengers started screaming on top of her voice that she was no longer travelling, thus causing panic onboard.
The passenger’s strange behaviour is coming barely one week after a teenage boy, Daniel Ohikena caused scare at the airport when he stowed away on Arik Air plane from Benin to Lagos.
Subscribe to our newsletter
The female passenger whose identity could not be ascertained at press time was said to have been ignored by members of cabin crew and passengers alike but her persistence led to suspicion among the passengers.
An eye-witness who confided in Saturday Vanguard said that the female passenger after boarding the flight screamed on top of her voice that she was no longer willing to travel with the plane.
The strange behaviour, however led to the delay of the Benin- bound aircraft for two hours as all the passengers were asked to disembark while the plane was screened again.
Saturday Vanguard further gathered that all the checked-in luggage were also off-loaded for proper screening by both Aero and Aviation Security, AVSEC, of the Federal Airports authority of Nigeria, FAAN.

It was also learnt that the passenger was handed over to security agents by AVSEC while the other passengers proceeded on the journey to Benin.
According to the source, “All passengers were already onboard and the pilot was preparing to take off before the woman started the strange behaviour.
“At first, no one took her seriously, but when the shouting and soliloquy continued, the passengers became apprehensive and ordered the pilot to abort the flight.
”The situation was not funny at all. In fact, the woman was speaking in a language which no one understood. But I can tell you authoritatively that all the passengers have been taken to Benin with the same aircraft and they landed in the airport safely.
”This was not the first time such an incident would be happening. In fact, it is common among first time travellers but no one knows the motive behind this act. However, I believe the security agents will do their work and reveal what led to the strange behaviour.”
Source: Vanguard