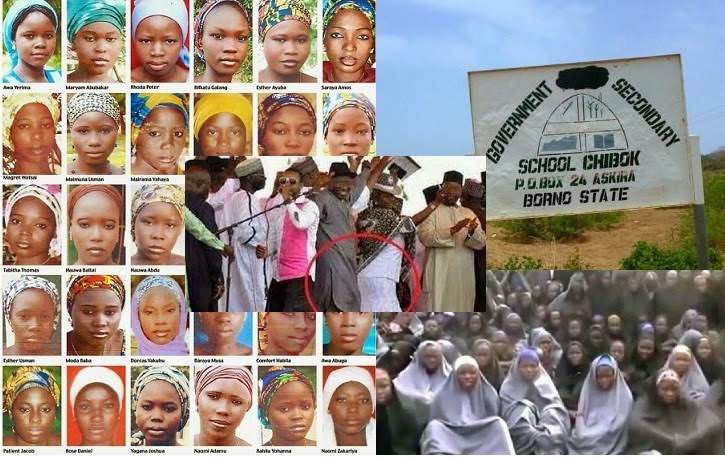 A source told Vanguard news that our Chibok daughters were now successfully hypnotized and had become Chibok bombers. – That is in the news today. A Military spokesperson had recently failed to deny this horrific possibility. DailyMail of UK in their publication yesterday also highlighted these fears.
Subscribe to our newsletter
So, it is possible that our Chibok 234 are now being employed as suicide bombers; killers who have not just been abandoned by us for dead, but worse yet have been abandoned by us to be indoctrinated into messengers of death.
While the Nigerian president, Goodluck Ebele (not Ebola as many are beginning to percolate) Jonathan was sleeping and dancing, things have surpassed our worst fears. We said the girls were as good as dead already; now they may be worse than dead. Jonahan said he could not hurry to bring back our girls, because ‘he did not want them to die in the process.’ Really? We told him to quit the BS already. #BringBackOurGirls, dead or alive! He left the girls and left Boko Haram; and even if our best hopes – that these suicide bombers are not our Chibok girls, they are our girls and as he leaves Boko Haram intact, they ARE recruiting our other girls, forcefully strapping them with bombs and sending them forth. While he waits Boko Haram is bombing up our Churches and Mosques, massacring our farmers and blowing up our bridges as they spread West and South, marking up more territory from Nigeria for their evil nation.
These happenings are not unusual. These are things that were clear to predict. This is why we marched, we wrote and we swore.
If you did not read my “#BringBackOurGirls: 100 Days In Captivity,” I suggest you do. Permit me to re-present these portions from the sixth and ninth weeks:
“By the sixth ten days, we were angry. These were the angry days. These were the bitter days. By these ten days, something had changed. We hated the world, we hated ourselves. Some of us asked to be taken on terror missions. Some of us wanted to go out and kill. We had completely lost faith in ourselves and in the world around us. Some of us still had faith in God, but frankly, some of us just did not any more. Our captors saw this in us. They commented that we had become more deadly than them. Our conversations were cold. We laughed when they talked about their campaigns of carnage. We discussed life with them; we discussed their plans with them. We discussed death with them.
“By the ninth ten days, we spent a lot of time praying for our parents. We spent a lot of time praying for you. We felt empathy… no, pity actually for you in the world outside. You see, our fate was pretty simply laid out. We had done what we could, considering our predicament. We had been brave and fought the terrorists; some of us were killed trying. We had negotiated with them. Our destiny was determined, harsh, but circumscribed. But how are you? How is your world? Your world full of wickedness, corruption and politics. How do you sleep at night? By these ninth ten days, we wished not to return to your wicked world – a world where you could abandon your children in the forests with very very bad men and were able to sleep at night, able to go to work the next mooring, to eat, drink, have sex, laugh and play, purchase nonsenses: a world where you could do and did nothing; a world where you could feel and felt nothing; a world where you could choose and chose nothing. You made these men. You made this world. You created this terror and you left it this way, afraid, unable or unwilling to do anything about it. Boko Haram was your reward. We felt empathy for you, who could live with yourselves knowing what you had created and that you failed for 90 days to come here and fight or die fighting to rescue your children. In these ten days we prayed for you and for Boko Haram. We prayed for the world…” Read full at [https://ends.ng/?p=1234]
Indeed it was clear to us that this abandonment, this curse will bring upon this nation more horrific punishment, as is the nature of life.

We told Jonathan from the first weeks that he should give us civilian patriots including ex-service men, youth, hunters and vigilantes the right to bear arms so we go into Sambisa and rescue and destroy – a mission our army has been too screwed up, thanks to systemic and executive corruption, to carry out. Jonathan loudly ignored us.
We told Jonathan to forget his cheap excuse of not wanting the girls’ lives to be risked and send in what troops he has; he danced and campaigned for 2015.
We told Jonathan in the first weeks of the abduction, that is the Chibok parents so chose, he should swap non combatant Boko Haram prisoners (who had no blood or rape on their hands) for the abducted girls, he rather abandoned the families till the great Malala came, and after she directed him to see them in Abuja, he rather ‘bribed’ them with N100m to forget their daughters and be quiet.
So Nigeria continues to live the curse. We continue to be plagued by this virus, worse and more deadly than Ebola. For Ebola leaves at least 10% of its victims alive, however this E**** virus does not only kill its victims, but also turns them into death machines.
After every hardship there is a time of respite and ease. So He has promised. Soon this noisome era in Nigeria’s history shall pass… some months, maybe years, but soon it will surely pass and we will have life again and be emancipated from this death spewing virus of corruption.
May the good and kind Lord have mercy on the Chibok girls and on us.
Dr. Peregrino Brimah; https://ENDS.ng [Every Nigerian Do Something] Email: [email protected] Twitter: @EveryNigerian