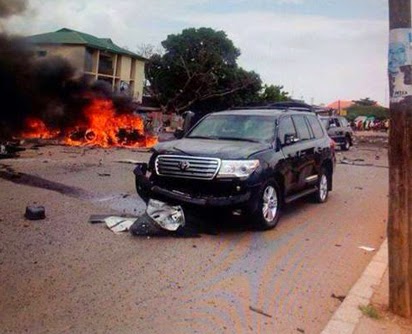 Firstly, in desperate and disaster times like these and despite the deaths, loses, tragedies and adversity, there is one victor and we felicitate with them: Toyota! Who wan buy bullet-proof Toyota? Err, we sell and supply bullet-proof Toyota, contact us for yours, everyone get one or die trying to. Seriously, we bet Toyota are already on the ground in Nigeria examining and documenting the first actual real-life test of their bomb-proof vehicles. Watch-out for the next Toyota ad- ‘saved a Nigerian opposition politician, General Buhari, live and direct….’
Subscribe to our newsletter
So, here is a list of the suspects who may want Buhari dead; not particularly arranged in any order:
Reuben Abati: The Special Adviser on Media and Publicity to Goodluck Jonathan, the Presdent of Nigeria. Reuben Abati is not a particular fan of General Muhammadu Buhari. We recently detailed how it was Reuben Abati that cooked up the libelous and slanderous accusation of Buhari being behind terror in Nigeria. His infamous ‘‘For the attention of General Buhari’ memo of April of 2011, when he manufactured all those lies attributing post-election violence to General Buhari. To have invented the slander we all got used to that made us all think Buhari promised to make Nigeria ungovernable after he lost in 2011 – which he never did – was the vilest act possible, and for Reuben to have cooked all that up, he seriously does not like the former head of state. Buhari dragged him to court and in Guardian of July 11, 2013, where the initial libelous article was spread; Reuben and the Guardian published an unreserved apology to Buhari then. We elaborated on this here: https://ends.ng/?p=1252. To sit behind a computer and string-up and manufacture accusations against an innocent person for being behind terror – an accusation that merits death if found guilty by the state security services – Reuben Abati certainly comes at the top of the list of those who want Buhari dead.
APC rivals: It is possible that in the tussle for the number-one position in APC some rivals of Buhari who see him as more liked for the number one spot, perhaps would rather tear the nation to pieces by assassinating him than have him victorious. These types are the types who rather destroy (daabaru) the game than let anyone else win.
PDP Bamanga Tukur: He is former PDP chairman and one of the closest bed-mates of President Goodluck Ebele Jonathan; who Jonathan fought his best despite all odds and loses to the party, to keep as PDP chairman, and this individual it is who Jonathan immediately the very next day he was forced out, hired as head of the Nigerian Railway corporation. He STILL holds that public office! Bamanga Tukur is on record and never denied it, for stating in May of 2012, that: “Boko Haram is fighting for justice; Boko Haram is another name for justice.” A statement that clearly demonstrated that Bamanga Tukur supports the terror organization and believes that their pogrom of Muslims and Christians alike in the north, and their reign of genocide on farmers in the north and bombing at bus stops and now bombing of the ex-head of state and attempt at Sheikh Dahiru Bauchi, are acts of ‘justice.’ “Kill Buhari for justice?” What justice is that?
Senator Ali Modu Sheriff, SAS (PDP): Implicated clearly as a founder of Boko Haram, SAS has recently been empowered beyond measure by the Goodluck Jonathan ruling PDP administration. Boko Haram has been predicted to grow in political deadly reach and power with the unleashing of this terror affiliate on the people of Nigeria’s north. SAS was not too long ago reported arrested in Cameroon for ties to Boko Haram terror; the Cameroonians unlike us, do not embrace terrorists. Upon his arrest, SAS was said to have said: “I did not know that Cameroonians are like this, I prefer to go back to where I came from.” The Goodluck Jonathan government got SAS out. The assassination attempt on Buhari’s life and Sheikh Dahiru Bauchi described to be a Jonathan administration critic and also an outspoken critic of Boko Haram is not surprising with SAS’ empowerment. SAS is among those incriminated in the White paper Abba Moro 2012 report on Boko Haram founders, on President Jonathan and NSA Dasuki’s tables.
Vice president Namadi Sambo (PDP): Linked multiple times to Boko Haram, Vice president Namadi Sambo is always suspect in the activities of the sect. General Buhari recently said ‘damn-it’ and called Sambo out on his links to the sect. Buhari obviously could not remain a gentle man any more with all the false accusations encouraged by the administration against his person and in an unusual blunt submission, declared that ‘we all know Vice President and PDP politician Namadi Sambo is Boko Haram sponsor.’ Namadi Sambo possibly did not take this lightly and waited for the right moment to try to kill general Buhari. Buhari’s words from March 25, 2014 in the Punch:
“Furthermore, we knew of the confessional statement to the State Security Service by one of the PDP stalwarts that the contact with Boko Haram was with the imprimatur of the Vice President Namadi Sambo.”

See other links of Sambo to Boko Haram: SaharaReporters, Jan 17, 2012; “VP Sambo Had Close Ties To Alleged Boko Haram Sponsor;” and from Vanguard “Terrorism Trial: Senator Ndume Says VP Namadi Sambo Was Aware Of His Activities With Boko Haram.”
It will not be surprising for Namadi Sambo to be seriously hurt by this most incriminating highest level Statesman accusation of his role in the terror organization; especially at a time when Boko Haram is at last attracting global attention; Buhari as such is a threat to him, being someone who knows the ‘real-deal.’ The assassination attempt on General Buhari’s life 4 months later will not be surprising.
Maj. General Hamza al-Mustapha (PDP): Al-Mustapha who just retired from the army this week, was the Chief Security Officer of General Sani Abacha. This was one of the most brutal regimes in Nigeria’s history and compares only to the current regime by many reviewers. Major General al-Mustapha was incriminated in leading the assassination squads for dead dictator Sani Abacha. He is the accused murderer of one of Nigeria’s most phenomenal and powerful women figures, Hadjia Kudirat Abiola. Since his betraying release from jail under Goodluck, he has been accused by an ex-President of leading an assassination squad on behalf of the current Presidency. He is a suspect.
The First Family (PDP): Goodluck Jonathan cannot handle opposition. His response at the Nigerian Governors Forum. NGF election, by fellow southerner, Governor Rotimi Amaechi and the consequent threats to Governor Amaechi’s life with withdrawal of security attached to him, blockage of entrance to the Government house and other acts of reckless endangerment by the state security service under control from Abuja, remind us of the Presidency’s reaction to defeat and opposition. The swarm of impeachments of all opposition state governors is another current reminder of the President and first family’s response to opposition and embarrassment. The treatment of the families of Chibok, the teachers of Chibok, with their harassment and arrest ordered by the first lady of Nigeria. Patience Jonathan to the disappointment and shock of the entire observing world, is another recent reminder. The arrest in Kano of Ahmed Audi Zarewa for singing ‘Mai Zuwan Malafa,’ humiliating the president for coming to dance in Kano right when Nyanya was bleeding and the girls were abducted, is another pointer to the Presidency’s dastardly response to criticism and condemnation. The government clamp down on all Nigerian newspapers consequent to the prevalence of publications criticizing the government on security, looted billions of dollars and the abducted girls is another evidence of extreme behavior of the Jonathan government to criticism and condemnation. General Muhammadu Buhari just strongly criticized and advised the Presidency on its desperately political reckless actions which Buhari warned were leading to anarchy and war in the nation. The attempt on his life came two days after. The attempt also served as an invaluable distraction to several events including the coincidental 100 days abduction sorrow commemoration.
Finally, a quick comment on the security formations in Nigeria as related to the Buhari bombing event. 1. There should be better protocol when an escorted vehicle is chased. This can include the last convoy vehicle slowing down to properly cordon the approaching risk; and the use of a gun to stop the threatening vehicle to investigate it. 2. Our cameraman almost approached the General from his back as can be seen in the video. It was General Buhari who first turned back before his security detail did so and chased our cameraman. Security detail should be most in order at the time of incidents. One agent should have been looking backwards at all times as this is when an assassin may be approaching.
We commiserate with all the victims. We pray for the dead in Kaduna, Borno and elsewhere; for those killed in the peaceful procession yesterday. We were not distracted by the Buhari assassination attempt to forget our abducted girls at 100 days. Nor to forget #WhereIsOurMoney? Or to forget Abba Moro is not yet punished for #ImmigrationMurder, or to forget Wendell Simlin aka Reno Omokri, still paid with tax-payers money, or to forget #XYZMassacre, the Yobe girls abduction, all the abductions, Jonathan not visiting Yobe or Chibok and all other atrocities we face in the present persecution phase in our history.
#LongLeaveTheKing
Dr. Peregrino Brimah; https://ENDS.ng [Every Nigerian Do Something] Email: [email protected] Twitter: @EveryNigerian

Re: Imo PDP Leaders Had Fed On The Common Purse Of The State – Gov. Okorocha