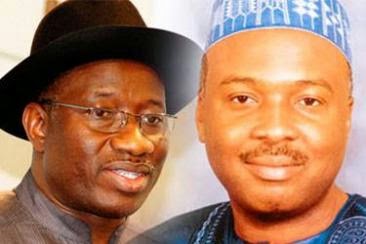 My attention has been drawn to a statement credited to a former Governor of Kwara state, Dr. Bukola Saraki, to the effect that the sack of Mallam Bolaji Abdullahi, Nigerian former Sports Minister, by President Goodluck Jonathan, was ill-advised and a ‘triumph of politics over competence.’
Much as I do not wish to disrupt the expected lamentations of Mr. Bukola Saraki and his ilk in the APC over the loss of a critical source of illegal slush fund through their mole in the Federal Executive Council (FEC), I believe however that I owe Nigerians, especially those that might have been bamboozled by the self-righteousness of Mr. Bukola Saraki, the duty to factually straighten the end of the rod.
Subscribe to our newsletter
I state without mincing words that Bukola Saraki’s latter day ‘sainthood’ is but a legendary and sophisticated lesson in political hypocrisy.
To start with, no known leader world over ever jokes with loyalty. Whether in Jamaica or Cuba, India or United Kingdom, loyalty is loyalty; it doesn’t have a different connotation. And to be fair to President Jonathan, he has evidently given Mallam Abdullahi and other hanky-panky kind in his cabinet enough room to shed their double-life toga to no avail. And it was in view of this that the likes of Caleb Olubolade, Godsdey Urebeb etc honorably resigned from the cabinet.
This is why Mallam Abdullahi’s narrative of being apolitical lacks content as much as it fails the basic test of value and integrity. And to make matter worse, several credible intelligence have pinned the former Sports Minister inextricably down to APC. In fact, the fact that the All Progressives Congress (APC)’s major party paraphernalia will be relocating to Ilorin on Sunday in ‘celebration’ of Bolaji’s inglorious exit from the Jonathan’s Government means a lot beyond the pump and pageantry.
It goes to show that Bolaji and of course APC had quite a lot of sleazy deals they kept away from the watchful eyes of Nigerians until now. This much betrays a malevolent intent as opposed clearly to nationalism which our propagandist APC is trying unsuccessfully to paint. Lucky us, the pack of lie and dubiousness that the Abdullahi narrative represents is fast unraveling under our noses much faster than envisaged. But until Saturday in Ilorin, let’s keep fingers crossed!
Now to the focal point of this article; the spooky Bukola Saraki, I am constrained to ask, if it were Bukola Saraki, would he have acted that states-manly? The answer I know is an emphatic NO.

A few verifiable instances will suffice here; as the self-acclaimed leader of his party in Kwara, Bukola Saraki is obsessed with and enforces ABSOLUTE political loyalty from his subjects. Lest we forget, Bukola, without a modicum of regard for filial relationship, brazenly sacked all his father’s loyalists in his cabinet, simply because he felt they were more loyal to his father than to him! And this is a father that single-handedly installed him as the Governor of the state! The likes of Suleiman Jabata, Bar. Akinmade Abolarin and Aishat Ibrahim were forced by Bukola Saraki to resign as state executives of the PDP then because they pledged allegiance to late Dr. Olusola Saraki, Mr. Bukola’s biological father and godfather!
As if that was not enough, Mrs. Caroline Adunmo, Chief JB Ayeni, Alhaji Bibire Ajape, Alhaji Kola Onimago and late Liman Idris were summarily sacked from the Government of ‘saint’ Bukola Saraki as Commissioners and Local Government Chairmen for no other reason than their pledge of loyalty to the godfather rather than to the impertinent godson! In fact, a whole member of the Federal House of Assembly, Hon. Wahab Issa, was illegally suspended from the then PDP for the same reason.
Unfortunately, Mr. Saraki has refused to change his notorious despotic spot. Overtime, Mr. Bukola Saraki’s fixation with absolute loyalty has devolved towards a mafia view of politics that has naturally lent itself to abuse of power. The situation in Kwara today has grown from bad to worse. It has grown so worrisome and dangerous that today in Kwara, every slight, private challenge to Mr. Saraki’s ill-considered preferences, no matter how thoughtful and genuine, is taken as an indication of disloyalty!
If Bukola Saraki ever thought that the Nigerian malaise of collective amnesia would make us forget those aspects of his political history so very soon as to have conferred him the moral high ground to condemn President Jonathan over the sack of the APC mole, he must be mistaken. The moral lesson here therefore, for Dr. Bukola Saraki and his co-travelers, is to kindly be advised to first cast out the large beam of wood in his own eyes before he belabours himself with the mote in President Jonathan’s.
Nigeria’s woes started the moment we refused that truth and falsehood be judged equally at the market square. And as long as the likes of Bukola Saraki decline to be judged by the same standard with which they judge others, as long as they are permitted without question to shed the sour and inconvenient baggage of their past narrative at the detriment of truth and justice, then I am afraid that the country’s path to greatness may yet be a mirage after all.
The views expressed in this article are the author’s own and do not necessarily reflect the editorial policy of universalreporters

‘Religionalisation’ Of Presidential Politics By Jonathan: A Bad Precedent By Senator Olubunmi Adetunmbi