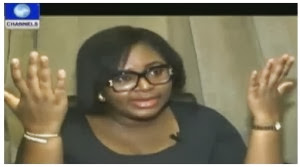 Wife of the Enugu State Governor, Clara Chime, has finally broken her silence in an exclusive interview with Channels Television, as she recounted her ordeal in the hands of her husband.
As Governor Sullivan Chime’s wife, she was in the public eye for about 5years. She has however been in the news recently because of the controversy surrounding her life in the Government House of Enugu State.
Subscribe to our newsletter
Things fell apart when she reached out to some members of the human right community and legal practitioner, Femi Falana, to save her from her husband.
Her appeal generated reactions from Nigerians and the civil society with several accusations, most of which bothered on unlawful detention and violence against women, given the physical and psychological suffering she was reported to be facing.

In this exclusive video, while recounting her experience, she also debunked claims that she had mental problem.
She said: “I suffered from depression and the treatment I got from my husband led to it.”
She also thanked Nigerians for coming to her rescue, expressing her joy that she is “now liberated.”
Source: Channels Tv