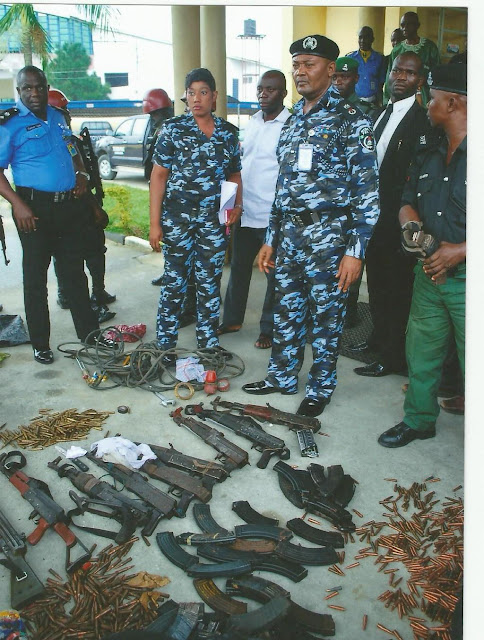 Subscribe to our newsletter
Following an extensive intelligence operation, the Rivers State Police Command in the early hours of Friday 26th July, 2013 aborted a planned Robbery attack targeted at one of the leading commercial Banks in the State when a cache of weapons were recovered from three vehicles hidden at a Mechanic village in Ihugbo, along East-West Road, Ahoada, Rivers State.
The weapons recovered include: Two (2) General Purpose Machine Guns (GPMG) with five hundred and ninety three (593) rounds of GPMG  ammunition;  Eight (8) AK–47 rifles with one thousand, six hundred and thirty five (1635) rounds of AK-47 ammunition and 57 magazines; One (1) G3 rifle with magazine; Two (2) dynamites with detonators and other explosives canes; Two Gas cylinders with welding accessories; One sledge hammer, one axe and Three (3) vehicles in which the weapons were concealed. 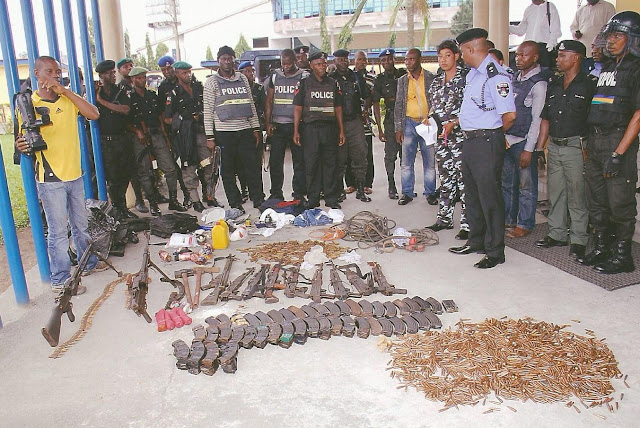 According to the Police in  a statement signed by Frank Mbah, Deputy Force, PPPRO; “The three vehicles involved; One Volvo S40 car, One Mercedes-Benz Saloon car and One Nissan Pathfinder Jeep (all vehicle registration numbers withheld) have been impounded by the Police. Efforts to track down the criminals behind the aborted plan are being intensified as other incriminating exhibits linking the perpetrators to the weapons were also recovered at the scene by Police operatives.”
Meanwhile, the Inspector General of Police, IGP MD Abubakar, CFR, NPM, mni has commended the officers and men of the Rivers State Police Command for the impressive recovery. He enjoined all Police Commands/Formations to up their game particularly in the area of intelligence gathering towards providing adequate security for the citizenry.
The IGP reminds Nigerians of the need to always report all suspicious activities to the Police, and also urges the citizens to remain confident in the ability of the Nigeria Police Force in the discharge of its Constitutional duties.

Award Winning Nigerian Music Director, Jailed 90 Years In The US For Fathering 6 Children With His Own Daughters