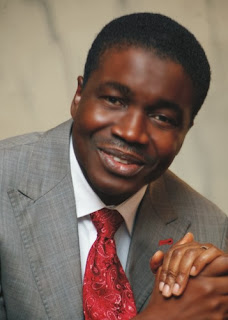 David Abioye ,the Ist Vice President of Living Faith Church aka Winners Chapel has displayed rare qualities of humility, loyalty and faithfulness in his service to Bishop David Oyedepo and Winners Chapel family. It is prophetically discernible that Bishop David Oyedepo is the current Apostle of Faith and in his extraordinary work of faith he has mentored many sons of the prophet, one of which is David Abioye.

David Abioye, the second most senior bishop in Winners Chapel, has been with the presiding bishop since the inception of the ministry in 1981. Abioye saw Winners Chapel grow from a small church in Ilorin to a mega church with branches in over 60 countries. When Oyedepo left Kaduna for Iyana Ipaja, Lagos in 1989, Abioye was the spiritual giant who manned the Garden of Faith, the church’s National Headquarters while Oyedepo took over Lagos and later Canaan Land, Ota. He was ordained a Bishop under Living Faith Church in 1993.
In 2004, Oyedepo transferred Abioye to Abuja as the senior pastor and it took only the grace upon his life for the crisis generated by that transfer to be quelled. The former Bishop of Abuja, Dayo Olutayo, resigned from the church in the wake of Abioye’s transfer and many thought that Winners Chapel in the capital city will collapse in his hands but after few months of shaking, the church stood on its feet and multitudes thronged towards it.
Abioye supervised the establishment of numerous branches of Winners Chapel in the capital city including Karu, Nyanya , Mararaba, Lugbe, kubwa, Gwarimpa, Jahi and numerous other mega churches before he moved to Goshen City, a 15,000 capacity auditorium in Auta Balefi, Kilometre 26, Abuja Keffi Expressway which sits on a large expanse of land estimated to be over 600 acres with estimated cost of initial construction cost being put at over N2 Billion naira.
It was on record that Goshen City was built within 18 months and crowds of worshipers have continued to overflow the place. Goshen City has a primary school (Kingdom Heritage Model School), a secondary school (Faith Academy), a youth center, a mini housing unit, guest houses, printing press, youth church and the massive auditorium which holds two services every Sunday. Goshen City is the headquarter of World Mission Agency (WMA) where the activities of churches in the mission field of the world is commissioned and supervised
David Abioye is a seasoned teacher of the word. While Oyedepo oscillates between insightful mysteries and deep prophetic release, Abioye goes into deep expositions of the Word, and breaks the lump, heavy prophetic releases of the Presiding Bishop into pieces such that even the newest convert could grasp, thus creating a colorful balance in the ministerial team of Winners Chapel.He and wife Mary had authored many inspiring books.
Despite all the greatness associated with David Abioye, he has not failed in private and public to attest his loyalty to the leadership of Bishop David Oyedepo. During Shiloh programmes, with the exception of 2013, where Oyedepo’s son took over the Youth Seminar, Abioye had not failed to re-emphasize to the teeming youth of the church the need to remain faithful to the leadership of the presiding bishop and those teachings of his have greatly influenced the attitude of the church in general that they’ve learnt to be patient with what they couldn’t understand till they grow into maturity.
Till a few years back, David Abioye was the sole Vice President of Living Faith Churches Worldwide and is in charge of the general administration of the churches in Nigeria and overseas but his office has been split that he now is the first Vice President. Afterwards a change in the composition of the Board of Trustees of the church further reduced his influence. Recently, the succession pattern as enshrined in the Church’s ‘Red Book’ or ‘Mandate’ further foreclosed the possibility of succeeding Oyedepo in the future. I was personally aware that since the past ten years some persons have advised Abioye that it is time to part with Bishop Oyedepo.  While some alluded to gradual marginalization, others concocted all manners of suppositions-yet Abioye had always maintained that God called him to follow and obey his master (Oyedepo) as Joshua followed Moses, leaving those break away advisers disappointed.
Abioye have demonstrated that one must not be a President and Founder of a ministry before getting fulfillment in God’s vineyard. The penchant with which many persons rush to start their own churches, ministries, and missions without authorization from the Grand Master and Bridegroom of the Church, Jesus Christ, is grieving to the Holy Spirit. It creates bad blood, divisions, quarrels and enmity and at the end it is the flock of Jesus Christ that suffers. It is possible that a  pastor, priest, prophet could be instructed to start a new work by God, and it is imperative that such a one must obey, but majority of the crowd masquerading as founders of churches were not divinely authorized to do so.
People are no more patient with their leaders and they are quick to claim that God had called them for something else. Therefore, Abioye’s stay in Winners Chapel has made many gallivanting pastors stick to their visioneers and wait for God’s appropriate time to quit. However, one must not always quit where one started.
Jacob, one of our fathers in the faith, was with Laban for 21 years and his wages was changed ten times, yet he did not leave Laban until God authorized him to get back to his father’s house -Genesis 30:1-28; 32 and 33. This does not presuppose that Oyedepo is cheating Abioye- rather it justifies sticking to a place until God speaks otherwise. Therefore, pastors should learn from Bishop David Abioye and remain faithful in the place of their assignment. They must ignore rumors, gossips, insinuations and tale bearing of men and ask God for direction.
David Abioye has displayed unparalleled loyalty, faithfulness and service to Winners Chapel and Bishop David Oyedepo, one hopes that this service continues till God only speaks to the contrary-one prays too that those about to abandon their place of service without proper authorization will emulate Abioye, shun divisive tendencies and concern themselves with building the church of God till they get clear orders from above.
Obinna Akukwe
[email protected]
Follow on facebook

Sorry, But This APC Is Not Change! By Adekoya Boladale

How Two Nigerians Students Died In Donetsk, Ukraine, And The Story Was Twisted