Now That Over 1800 Are #Massacred, Let Israel Stop The #Genocide By Abdulbaqi Aliyu Jari 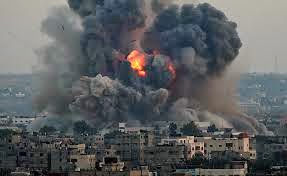 Earlier after two days of the start of massacre in Gaza by Jewish entity of Israel, I wrote an article that was published in Dailytrust newspaper of 10 July, which was equivalent 13 of the Holy month of Ramadan 1435 AH. The article was titled ‘ Israel Belligerence in full play”. By that time, it was only about 72 people that were massacred from the Palestinian side, while zero from the Israel side. ‘This are not numbers, but they are humans’ as stated by the Palestinian ambassador to the United Nations. “They are people with dream and aspirations like any one of us here”. Israeli PM Natanyahu (L.A) has promised a very lengthy operation that is named “operation protective edge”.
Israeli military having all the sea, air and land power has been shelling innocent Gazans for 22 days now. While Alqasam of Hamas is only having punching guns and some small rockets. Israel is a rude and arrogant entity of ignorant escaped humans from the Nazi of Hitler. Even United States it closest alley, Israel do not listen to it when I calls for cease fire. While the Arabs, Turkey and the UN are busy pressing on Hamas to accept an unequal, variable terms that do not  even closely meet the aspirations of Gazans and Palestinians at large. The European Union and the US are on the side of Israel despite it arrogance and militancy. The US president has in many times reiterate his countries stand that “Israel  has the right to defend it self”, while cutting short of saying Hamas and Palestine has the right to resist occupation.
Subscribe to our newsletter
From the start of the war to date, over 1300 innocent Palestinians have been massacred, while about 60 or more Israelis have lost their lives also. All lives lost is unfortunate and uncalled for. But is more unfortunate that innocent Palestinian children are the most casualties of the war. With markets, hospitals, UN buildings been hit deliberately by the Jewish entity of Israel. Even the media agencies like Aljazeera were hit deliberately to undermine them from reporting the through nature of the Genocide since it is only Aljazeera that is on ground reporting the Massacre. The UN said on 29 July that Israel has committed ‘war crimes’. But there is no way Israel can be punished for its crimes, because the US is there to Veto the bill. The UN settings should be reviewed as it is a set for anarchy and despotism and  brutality.
The most unfortunate thing since the start of the war is that, there was report that Israelis do seat from hill top to watch bomb as it hits Gaza. they have forgotten that about 56 years ago they were in the same situation like that of Gazans, they were been killed and slaughtered by Hitler  while the world was busy trying to assist them  escape death.
“What goes around come around”. Israelis should read about the story of Salahudden Ayubi of Misrah (Egypt) who conquered and occupied the city of Jerusalem forcing the Zionist to live in 1187CE. One day, God Almighty will rise from the Palestinians another Salaudden Ayubi or even stronger, he will live to defend his people and their soil. Or even among the rest of the people, I wish I will be that, my ancestry is traced back to Egypt.
The UN is a toothless bull dog, it can only bark but cannot bight. Is western and partial. Its decisions are biased and meaningless. I wonder why other Veto powers like Russia and China will not help counter the west. May be the location of the UN should be changed to a peaceful and non aligned country that do not interfere in others business. Where are the Arabs? Where is the Arab League? Where are the so called Arab leaders. ” Blood is ticker than water”.
The US is standing firm depending its alley while Egypt cannot even open the Rafah crossing for aide to enter. Even African countries and brotherhood are/is better and stronger than that of the Arabs respectively. During the struggle for independence in most African countries, many African countries defy the colonials and help their brothers and sisters. During the apartheid regime in south Africa, Nigeria, Libya, Ethiopia and even Kenya did played a very significant role in undermining the apartheid government and in supporting their brothers and sisters.

General Murtala Muhammads eloquent speech of Africa has come of edge is a wonderful example of open, unhypocritical support for South Africa. The Organization of African Unity (OAU) which is equivalent of the Arab league did openly promote the well fare of south Africans.
The world, Muslims, Christians, Hindus, reds, black and even some Jews like Noam Chomsky have agreed that Israel aggression against Palestinians is genocide and massacre.  Since 1940s when the Jews where first  brought to Palestine, over 1 million Palestinians have in one way or the other suffered from the Jewish aggression. For peace and justice to reign in the world, the State of Palestine must be created fast and Israel must be brought to justice.
The UN must act fast. The Arab league must live up to expectations. The ICJ must do something now. The UNSC should fast mobilize UNPC to defend Gaza. The ICC must see PM Natanyahu in jail. The ICC is not only meant for African leaders, people like Natanyahu and liberman are meant to end there also.
Comrade Abdulbaqi Aliyu Jari Katsina.
Katsina local government of katsina state of Nigeria.
+2348035424321
@jariabdubaqi.