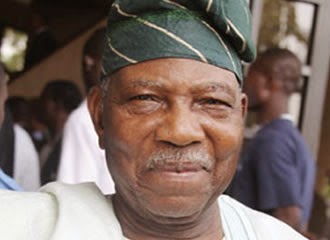 Chief Reuben Fasoranti is the National Leader of the Pan-Yoruba socio-political organization, Afenifere.
In this interview with Vanguard, Fasoranti said the ongoing national conference is a welcome opportunity to adjust the Nigerian federation, that the Yoruba sage, Chief Obafemi Awolowo would have backed it and faults northern leaders on the Boko Haram insurgency.Excerpts:
Subscribe to our newsletter
Nigeria has held many constitutional conferences without result. Do you have hopes in the ongoing conference?
I have confidence that Nigeria will be restructured. I am confident that it will be alright with Nigeria.
What gives you that confidence?
It appears everybody is in favour of the conference. Everybody is conscious of having the conference.
Even in the north, there are indications that they are all for it. Everybody is fed up with most of the things that are happening now. So we want to meet and decide whether to go on as a country or not to go on.
I am sure that majority are in favour of our continuing with our association.
What do you make out of the resolution by the All Progressives Congress, APC not to be part of the conference?
That is just one voice. From all indications, I think they spoke before giving it a thought. Majority of Nigerians want it, even in the north. Our people have travelled and made consultations.
The feeling is that we should meet and fashion out the modus operandi for the future and for our coexistence and spell out areas of differences and then try and agree on how to go on. I think that is the consensus.
President Goodluck Jonathan has been accused of having a hidden agenda for this conference. Do you believe this?
It is not fair to jump the gun. The president has indicated that he wants the conference and made preparations for the take off. From his utterances, I think he is all for it. Whether at the end of the day he will agree with the decision taken at the conference is a difference matter.
He knows Nigerians want to meet and talk and decide on how to go on. Some people have said it may lead to a break up of the country but I do not believe that.
But should the unity of the country be negotiated?
When we meet, then we will decide on what to do. There are certain things that need to be taken care off.
For instance, resource control, whether the thing should remain as it is now is an issue.
Then the association itself, I think it is necessary to sit down and reexamine the basis of our unity. It is totally desirable.
Should there be no-go areas?
There should not be no-go areas at all. We are in Nigeria and all the matters affect us. So, let people express their opinion and then, we agree on how to go on.
What do you make of the composition of the delegates?
Well, some people are saying that the president has taken a very big chunk of the nominees. When they meet with the representatives from the states, it will be easy to fashion out what to do.
I do not think we should be prevented from discussing issues affecting this country, after all, we are all citizens of this country and we have to know how to go on.
The reason for this question is based on the argument of some that the delegates should have been made up of younger persons
People were consulted before the list was drawn up. For instance in Ondo State, there were consultations and the result of the consultations is what we are seeing now.
From the look of things, debates will be very robust, there will be no gagging at all. From what I can see and from the study of the composition of the people there, they will be free to talk. Nobody will be asked not to talk on any issue. I think they are all in favour of an open playing field.
Would you say that the Southwest sent her best eleven to the conference?

As far as Ondo State is concerned, we are alright, people, who were sent from this state will deliver the goods and I think ditto for other states in the Southwest.
As Afenifere leader, what should be the focus of the conference?
The focus will be on issues. Take for instance, resource control, as much as possible, the areas where certain things are produced should benefit.
We don’t believe in the practice whereby the centre controls the bulk of our revenue coming from the different states.
If you are an oil producing area, you should have very good benefit and the centralization of revenue, which is now being dished out, is what we do not support. We want to say that as you produce, you should benefit.
Centralizing the revenue
For instance, in the days of Awolowo and Zik, we depended solely on cocoa. Whatever we produced here, we benefited maximally. At the moment, centralizing the revenue and then sharing at the end of every month is not desirable at all, it is not ideal. The states have now rested on their oars because every 30 days, they go to Abuja and share the revenue, which I don’t think is ideal.
That is why we say as you produce, you should benefit and that is bound to be an impetus for people to work internally. That is our focus. What are those issues the delegates must avoid to prevent the purpose of the conference being defeated?
I don’t think they should have no-go areas. Anything that is affecting this country should be discussed and where the people have the consensus, they should take a decision, it does not matter whose ox is gored. We must know what people are thinking because these are matters that affect their fortunes. They should be allowed to debate it and come to a consensus.
Would Chief Awolowo have supported and participated in the conference were he alive?
Being a democrat, I am sure he would have subscribed to it. He would want to give everybody a chance to express their views, he won’t oppose them.
I am sure he is large hearted enough to say, let us know what you feel about a particular matter and when it is fully debated, a decision will be taken.
How true is it that Afenifere has been bought over by the president to win sympathy for him ahead of the 2015 general elections?
No. The things we discussed with the president are things that affect us, we have not gone to him to make representations or for any favour at all.
Federal roads
For instance, we were insistent on the roads being made in the Southwest and he acceded to it. When the Lagos-Ibadan expressway was being flagged off, some of our people were there, that was as a result of our pressure.
Most of the major roads in the South West were not done particularly the federal roads and he promised that he would do something and later, the Lagos-Ibadan expressway was flagged off, which is for the general good and not particularly for any political party.
What we are asking for is for the general good. In fact, if anything at all, it is he who should be asking for our favour, we are very blunt and we always ask for the rights of our people.
Will Afenifere be supporting any political party or candidate for the 2015 elections?
When the time comes, we will decide. It is too early to commit ourselves.
How can the growing level of insecurity in the North be addressed?
It appears that the Federal Government is not up to the task, therefore, I humbly suggest that it should consider approaching the great powers like America and Israel for support and ideas because they themselves are experts in maintaining internal security.
It appears it is beyond us and so, we should try and approach them on equal basis and ask for their support and I am sure they will readily give it.
They had expressed some concerns like this before, it appears we are not up to it. So, we should not be too proud.
And you do not suspect that some politicians are exploiting it to their advantage especially ahead of the 2015.
Before now, I had said that some leaders are in support of what is happening. They do not speak up, they are looking on and it is happening in their area.
If they are not supporting it, they should denounce it and come together to support the federal government.
Source:  Vanguard