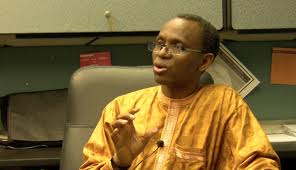 No man goes to warfare without enough amour neither do anyone engage a tiger in a battle without relevant shields. My attention has drawn to a post by former Minister of the Federal Capital Territory (FCT), Nasir El-Rufai which he alluded to the conversation I had with him as lies. Being a man I respect and hold in high esteem; I initially thought of allowing the matter to rest, but after much consultation with other highly respected colleagues and politicians; I have painfully decided to tell the world my own part of the story.
For the records, I called El-Rufai at exactly 1;32 pm after much network failure. I had to change my Etisalat simcard into a ‘rock with me’ Nokia phone to enable make the call smoothly which we did. It is pathetic that El-Rufai do not understand the working of the media despite having a media aide, else he would have realized that I reported the exact conversation that I had with him.
I hereby present to the readers and discerning minds my report which was published on Elombah.com https://www.elombah.com/index.php/reports/breaking-news/21739-el-rufai-denies-supporting-muslim-muslim-apc-presidential-ticket, thus:
EXCLUSIVE: EL-RUFAI DENIES SUPPORTING MUSLIM-MUSLIM APC PRESIDENTIAL TICKET
Fejiro Oliver
As controversy continues to trail the alleged statement of Mallam Nasir El-Rufai support for a Muslim-Muslim Presidential ticket for the All Progressive Congress (APC) party, he has come out to deny ever issuing such a statement.
In an exclusive telephone conversation with Elombah.com on Sunday, the former Minister of Federal Capital Territory (FCT) fumed at why Journalists should misrepresent what he wrote on his Facebook wall.
“Fejiro, I did not say such. I don’t know why you guys who call yourself Journalists will not put things the way it is said. Go and check my wall. I said whether it is a Muslim-Muslim ticket or a Christian-Christian ticket, I don’t care. All I want is for us to look at the personality of the persons involved and not the religion. Please don’t misrepresent me”, he stated.
El-Rufai noted that he will support any ticket irrespective of the religions the candidates are made of”
Here is what El-Rufai wrote on his Facebook wall concerning our conversation:
“STILL ON THE PRESIDENTIAL TICKET AND THE IRRELEVANCE OF FAITH: – April 6, 2014

Fejiro Oliver of Elombah.com either do not understand simple English or was hired to lie on behalf of the likes of Wendell Simlins of this world.

What I opined about same-faith ticket is clear. I do not care about the religion of the candidates providing they have the capability, competence and capacity to fight corruption, create jobs and develop our nation without discrimination. And these qualities can be ascertained from their track records in public service and the private sector.

I do not care whether the 2015 presidential ticket consists of Christian-Christian, Muslim-Muslim or Ifa-Ifa. In my 54 years of being a Nigerian citizen I did not feel oppressed when Gowon and Akinwale-Wey ruled this nation.

Those trying to reduce the criteria needed to find those to fix the problems of Nigeria to religion should tell how the balanced Jonathan-Sambo ticket has stopped the administration from being the worst looters in Nigeria’s history – $20bn of federation revenues, N2.6 trillion of fuel subsidy in 2011 alone, billions of pension funds, kerosine subsidies and $1.1bn from the Malabu Oil scandal alone!

Next time a Fejiro Oliver calls any one claiming to be a journalist and asks you to ‘clarify a story’, and you respond “read my Facebook page, I write in simple enough English”, record the phone conversation (I did!) as he is likely to have written his story before calling you. You may be talking to a chartered and certified liar.

We thank God for social media outreach that reduces our dependence on persons that either lack professionalism or conscience or both.

Now here is the poser for El-rufai and the general public. Is there a difference in what I reported and what El-Rufai posted? The quantity surveyor should be grateful that when other media and critics attacked him and misrepresented his opinion, I applied professionalism by calling him to hear from him, and without adding words of my own, I reported what he said, which were all to his favor, thus removing the negative ways in which he was viewed.
In case he does not know, he was already been seen as a religious bigot by many Nigerians until my report came out to clear the air. Now how did I know this? As soon as my report was published, I began to get calls and social media messages from fans and friends, asking me if I have become the official spokesperson of El-Rufai that I have to defend him of his statement. Where then did I go wrong that he has to take to social media without consulting me or my medium before shooting himself on the foot?
Will El-Rufai also deny telling me that he said he has tried calling my Publisher, Daniel Elombah, to make him clear our first report, whose headline nailed his speech, but couldn’t get him? His post has only made me believe that he doesn’t read before writing or his media adviser must be failing in his duty in telling him to choose his battles wisely. The man I once thought to be intelligent has made me believed that he just post on his Facebook wall for fun without thinking or reading through. I beg to lecture him a little bit on the workings of the media. Reporters are not attacked when they report, rather the media house under which they work are always the reference point. The moment a report is published, the medium takes full responsibility and not the reporter(s) else El-Rufai would have channeled his blunt post to Elombah.com and not Fejiro Oliver who came to deliver him from the opposition attacks.
I make bold to say that I have spoken to many other APC Chieftains and none of them has ever said I reported our conversation out of contest. For a reminder, my conversation with the APC National Publicity Secretary, Lai Mohammed laid to rest the media rumor that they sacked their media consultant after the famed Oby Ezekwensili APC invitation speech, as I told the world that such was not true.
It is unfortunate that El-Rufai in his bid to always be an opposition party man will choose to equate me with the Wendell Simlins of this world. If there is anyone who does not understand English, I regret to say that such a man is El-Rufai. Let the people be the judge for this is my story.
These little things matter…
Fejiro Oliver, a Journalist and Media Consultant can be reached on [email protected] and +2348026797588 (sms only please). Follow on twitter @fejirooliver86 and Facebook; fejirooliver86. Like our Facebook page – secretsreporters

RE: CALL FOR INVESTIGATION OF SUSPECTED CERTIFICATE FORGERY BY TUKUR MAMU