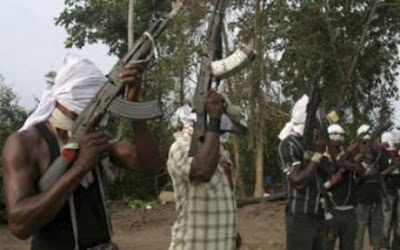 The Nigerian Police Command in Gombe has confirmed the death of two policemen shot by gunmen alleged to be robbers.
According to sources speaking to LEGISREPORTS, the gunmen invaded a Mega Filling Station in the state at around 7:40 pm last night and started shooting sporadically demanding for money from the station staff whom they met at the station.
Subscribe to our newsletter
Police Public Relations Officer, DSP Fwaje Attajiri while confirming the incident, told Newsmen in Gombe that, the police believe that the robbers are transit bandits, because the Police had received a crime report from Yola Adamawa, in which a Hilux van vehicle belonging to the Deputy Comptroller of custom had been ceased at gunpoint.
DSP Attajiri said the police immediately swung into action on hearing the incident. The stolen vehicle was intercepted by the Joint task Force around Ture-Balam, Yola road in Gombe.

According to him, another report later came to the police command about the gunmen who invaded the mega station in Gombe, he explained that in the process of exchange fire between the armed men and the police, two of the police men were eventually shot while one of them has been injured.
He added that, already the police command has sent messages to the neighboring states and all the local governments in the state including hospitals to report anyone who is seen with bullet wounds and those investigations are being made to ensure that all perpetrators of criminal activities have been fetched out.
In another development, Attajiri disclosed that, men of the police force have raided a criminal hideout this morning in Gombe and had arrested 6 suspects and recovered a vehicle suspected to have been used for criminal operations with a plate number AE 140 Akk.
He assured that police will not rest in discharging their duties of ensuring peace, stability and maintaining order, calling on all citizens of the state to go about their normal businesses as the police will continue to ensure that the enjoy related peace.
Source: LEGISREPORTS