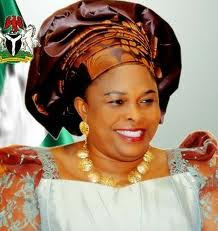 First Lady, Dame Patience Jonathan, has lambasted Governor Rotimi wife’s condolence visit as an afterthought as the first lady said in a statement signed by her Director of Information, Mrs Ayo Adesugba,  that Mrs Amaechi’s visit was apparently in reaction to a recent disclosure that no top official of the Rivers State government, including Governor Amaechi and his wife have paid a condolence visit on Dame Jonathan since her mother died last month in a vehicle accident.
According to the statement, all persons who visited to commiserate with Dame Jonathan did so in the Presidential Villa, Abuja, and her Port Harcourt residence.
The statement entitled “Gesture of Compassion Comes from the Heart” read:  The Nation newspaper of today, 21/08/2013, on page 50, carried two pictures of the wife of the Governor of Rivers State, Dame Judith Amaechi. One of the pictures showed Mrs. Amaechi signing a register with the caption:  “Wife of the Rivers State Governor, Dame Judith Amaechi signing a condolence register during a visit to Nigeria’s First Lady, Dame Dr. Patience Jonathan at the Oba’s King Perekule GRA, Port Harcourt residence to commiserate with her on the death of her mother, Mrs. Charity Sisi Oba…”
Subscribe to our newsletter
Another smaller picture shows the First Lady and the Governor’s wife walking side by side. The pictures  are obviously in response to a release issued by the Office of the First Lady on 19/08/2013 which stated in part that:
It is instructive to note that since the death of Mrs. Charity Oba, the mother of the First Lady, several groups and individuals from across the country  have come to condole the First Family at the State House, Abuja.
They include Executive State Governors and their wives from all the political divides;  Nigeria’s  former Presidents and Heads of State and their wives, captains of industry, female Ambassadors and High Commissioners of Nigeria, other members of the diplomatic corps, royal fathers and traditional leaders – the list is too numerous to call.

However, the Governor and the wife from the State which the First Lady hails have not paid such a visit. The caption in The Nation states that the photographs were taken in the house of the late mother of Dame Patience, Mrs. Charity Oba. However, the First Lady did not receive guests for condolence visits in her late mother’s home.
All those who come to pay condolences and commiserate with Dame Patience during her visit to Rivers State, came to the First Lady’s residence in Port Harcourt, where arrangements were made and facilities were made available to receive sympathizers.
We can borrow a leaf from His Excellency, Dr. Goodluck Jonathan who went to Lagos State with some members of his Executive Council, to commiserate with Governor Babatunde Fashola on the demise of his father, Alhaji Ademola Fashola.
Death does not know age, gender or political party affiliation. Neither should compassion.  Many of us claim to serve God. God, whether as Christians or Muslims is compassionate in nature. If truly we serve him, this should reflect in our actions.
We restate for the avoidance of doubt that neither the Rivers State Governor nor his wife have come to the State House, Abuja like so many other people from all walks of life, to condole with the First Family. This is a gesture of compassion that comes from the heart.
The First Lady, Dame Patience Jonathan, therefore holds no resentment towards anyone who does not wish to come to the State House, or to her residence in Port Harcourt to extend the act of commiseration.