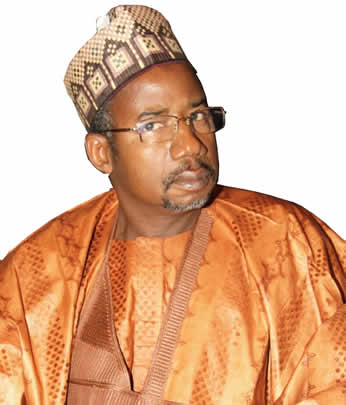 This are not the best of time for FCT Minister, Senator Bala Mohammed, as the Minister is being accused of siphoning hundreds of million from the FCT coffer  to finance his political ambition in Bauchi state.
Senator Bala Mohammed, had early last year dragged the Publisher of a Kaduna based weekly newspaper and Magazine Desert Herald to court, following a publication of a promo threatening to uncover the dirty under belly of Senator Bala Mohammed and some Directors in the FCT.
But to forestall the revelations Mohammed, had also used the Nigerian police to abduct the publisher, Tukur Mamu and dragged him to a magistrate Court, for an alleged defamation, even as the publication was yet to hit the street.
In the ensued persecution of Mamu, Bala had alleged blackmail and attempt to use the advertorial to extort money from him.
However, even before the arrest of Mamu, Bala Mohammed had been linked to several land deals, especially, the Malaysian Garden estate, which the Malaysian authorities specifically accused the minister of demanding for bribe to facilitate the approval.
While the allegation lasted Bala, was fingered in another scandal in Bauchi state.
Universalreporters learnt that Bala, in a uncommon political deft move had constructed a N300 Million Mosque in Bauchi, as part of his campaign to take over from the incumbent, governor Isa Yuguda in 2015.
The source of the fund according to a ministry official remains a matter of conjecture.
This medium gathered that investigation revealed that Bala, on assumption of office as Minister had initiated all forms of pony task force within the FCT, including the recent out law Pack and pay, which Motorists pay as much as 100 and 600 for packing in designated areas.
Indeed it took the intervention of a Sun Trust Savings and Loans Ltd which instituted a suit against the minister to halt the fraudulent collections and harassment of motorist.
Indeed the contract for the collections was believed to have been awarded to his girl friend’s and fronts.
For Senator Mohammed, controversy seems to have replaced his middle name.
In a statement made available to universalreporters   the Nigeria Union of Journalists, Abuja has raised another alarm on the 22 mini buses donated to the Bauchi state chapter of the PDP.
In a statement signed by Chuks  Ehirim,the Chairman of the Nuj, Abuja Council,the group want Bala investigated over the donation of 22 mini buses, value at N=143m.
“This council is indeed worried with the donation of 22-18 seater buses by the FCT Minister, Senator Bala Mohammed , to the Bauchi state Chapter, of PDP, conservatively, each buses costs N6.5m.it will interest us to know where the minister got N143m for the buses” he said.
Continued, “Our concern is also informed with the fact that the transport sector in the FCT is yet to see any appreciable improvement.
We have situation of non safety compliance and fewer buses plying various routes despite the celebration of launching of same”
The NUJ said it would not shy away from fulfilling its constitutional role of holding government officials accountable to the people, stressing that residents of the FCT deserve the best possible governance which can only be achieved when those running the affairs of the administration are accountable.
Several calls and SMS to the Special Assistant on Media to the Minister, Mr, Nosike Ogwuenyi, to respond to the allegations proved abortive, as he neither respond to the call or respond to the text messages.

We Will Offer Young Farmers A Voice—SSAP, Dr. Baraka Sani