Fani-Kayode: A Bigot In Search Of Redemption By Kelechi Jeff Eme 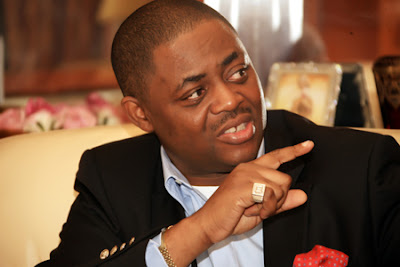 One lesson I learnt over the years is to ignore rabble rousers no matter the degree of their provocation. The recurrent decimal that defines political failures is their unalloyed penchant at deploying religion and ethnicity in craving for a seat on the political gravy train. The irony is the success rate of this tactics notwithstanding the damage it does to the polity and national cohesion. Are politicians really ready to learn or is the number the most important factor no matter the character of coalescing individuals?

I read the piece by Femi Fani-Kayode on the brouhaha over the “deportation” of some Igbos from Lagos to Anambra and one thing struck me: he was a man left in political wilderness and earnestly seeking for redemption through the back door. Unfortunately for him, the Yoruba political establishment on the left flank rarely forgives “vagabonds” no matter the staccatissimos of their music. So my summation is that Fani-Kayode is on a blind mission in pursuit of relevance. I must however concede that he is entitled to dwell in silly land where bigotry, charlatanism and idiocy reign supreme.

Only a man on the lunatic fringe could have authored the piece in question considering the factual inaccuracies and blatant falsehoods shamelessly displayed. That the writer eulogized the virtues of Sir Herbert Macaulay of blessed memory as a thoroughbred Yoruba man is not only strange but depicts the elastic intellectual flaws associated with him. Macaulay’s father was a native Sierra Leonean of Creole origin. He settled in Nigeria and did marvelous things and his son automatically became a Nigerian hero based on his fight for the people. If the loquacious Fani-Kayode appropriated the legacy of Macaulay and used same to demonstrate the impeccable heritage of his Yoruba tribe, what is the difference between his position and those who claim Lagos to be “No man’s land?” In any case, there are many Lagosians of Sierra Leonean and Brazilian origins that are rightly classified as indigenes. What is the difference between these Nigerians and Igbos or other tribes that settled and do business in Lagos?

Another juvenile sophistry by the writer was his introduction of Nigeria alongside Africa in the Zik’s address to Igbo union in 1948. He mischievously introduced Nigeria to deceive the gullible that there was an agenda by Igbos to “colonize” the country. 1948 was the pick of agitation for self-rule in Nigeria and Dr. Azikiwe spoke at the Igbo union congress to galvanize the people to be part of the struggle to liberate the continent. It is a shame that Fani-kayode classified that as the beginning of ethnic politics in Nigeria. He further stretched that to the failure of NCNC to be the dominant party in Nigeria at the time. I think this guy need to be educated a bit here. Two things contributed to the failure of NCNC to win the independence election in Nigeria: the departure of the present western Cameroun from Nigeria and the whimsical allocation of parliamentary seats to northern Nigeria at the time. The declassified British government’s report made this assertion very clear. Somebody should educate the writer that the NCNC and its allies led by Zik won the 1951 election in Western region before the carpet crossing denied him of the premiership. I must also add that the NCNC cleared almost all the seats in Lagos. How did the Azikiwe’s Igbo union speech which took place three years earlier affect the outcome of that election? Review your notes again Mr. Fani-Kayode.
It is instructive to note that had the British colonial administration been fair to Nigeria, Azikiwe could have occupied the Prime Minister’s position of the federal republic at independence regardless of the departure of Western Cameroun. The facts are there. The lopsided nature of parliamentary seats allocation was responsible and stated earlier. A glance at the popular votes during the 1959 independence elections proved this point beyond reasonable doubt: the contesting parties at the time, namely NCNC-NEPU alliance scored-2,594,577, Action Group-1,992,364 and NPC-1,992,179 votes respectively. However the above result translated into NPC-142, NCNC-NEPU-90 and the Action Group-73 seats in parliament. So the tagging of Zik and NCNC as ethnic oriented could only be the imagination of Fani-Kayode.
In further addressing the infantile tattles of the writer, he misfired by describing the Igbos as unfriendly to the eastern minorities that made up the old Eastern region. I admit that a few issues arose at the time and my conclusion is that the minorities could have gotten a better deal. However, I am amazed that this guy could go this far in exposing the political shortcomings of the Yorubas represented by Chief Obafemi Awolowo of blessed memory. While the dominant Igbos elected an Efik/Ibiobio man as the Premier of Eastern region despite its overwhelming majority, the Yoruba occupied all the prime positions in the Western region from Premier to Deputy Premier, Governor, Finance Minister, among others. How do you reconcile this? How many of us still remembers the saying that “the Ooni is here, the Alafin is here, the Western region is complete” notwithstanding the presence of the revered Oba of Benin at a state function?
On this issue of ethnic politics, may I remind the writer that the crisis that rocked Warri in recent past was a throwback to the Action Group years of old Western region. The itsekiris are known to have tribal affiliations with the Yorubas and identified with the AG at the time while the Urhobos led by the late Okotie Eboh were of the NCNC party. The government led by Chief Awolowo capriciously changed the nomenclature of the Olu of Itsekiri to Olu of Warri thereby ceding the metropolis to them at the detriment of the Urhobos and Ijaws. That was the genesis of the crisis that took place in Warri.
Let me finally address the issue of citizenship in a federation as practiced worldwide. Mr. Fani-Kayode must be living in utopianism to think that he has the capacity to stop a train that has taken off from the station. For his information, the “Lagos for Yorubas” he is craving for is impossible and exists only in his weird mindset. Lagos was a federal territory and was developed by the collective will of the Nigerian people. The world has moved so fast that xenophobic actions are no longer restricted within the territorial boundaries of a country or region. What you can do is to encourage your people to compete and do so fairly. Have you asked yourself what Lagos economy will look like if oil revenue and investment is taken off the state? What do you want Niger Deltans to do about their wealth that has been used to develop Lagos, Abuja and other cities? It is the foreign exchange import cover the oil wealth provides that sustains the Lagos industrial base. Do not be deceived my brother. We all need each other but that must be based on equity.
In a multi ethnic society, the likes of Femi Fani-Kayode are dangerous to national development and cohesion. That this man was a federal minister was a judgmental failure on our political and administrative leadership. The fact that a man imbued with all the inglorious anti nation building characteristic was allowed to occupy prominent positions in government is a further demonstration that our redemption is still far. Political abyss is the only dwelling place for the likes of this bigot.
The rest of the issues raised by Fani-Kayode are too pedestrian to indulge him with a response.

APC: A Whited Sepulchre Or The Real Deal