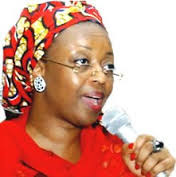 The citizens of Nigeria have declared oil minister Diezani Allison-Madueke wanted on several counts of aggravated robbery, economic sabotage, grand larceny and sponsoring terrorism. All citizens are hereby alerted to firmly accost the oil minister wherever she is seen.
Nigeria’s senate and executive leadership is playing deadly games with the people’s lives but we are no longer having it. They keep delaying prosecution of this criminal and locking her and others up, and allow them to continue the robbery that is causing a state of increased hardship, insecurity, terrorism and death in the nation. Funds stolen by this minister continue to be used to sponsor terrorism in Nigeria.
Subscribe to our newsletter
The Central Bank of Nigeria, CBN in February this year, indicted Diezani Allison-Madueke in the case of the missing $20-127 billion dollars. Nigeria’s minister of economy, Ngozi Okonjo-Iweala, in her press release through the BBC on February 25, 2014, confirmed this money has been stolen/ is ‘missing.’ Diezani Allison-Madueke stands indicted in the robbery of massive amounts of critical funds needed to beef-up the nation’s security and provide social welfare for the downtrodden citizens, which would be a significant deterrent impetus toward aggravation to crime and terror. Diezani Allison-Madueke’s robbery of the nations billions is a significant contributor to our deaths in Nyana and elsewhere around the nation, totaling 40,000 deaths since this administration took office by some estimates.
Diezani Allison-Madueke with her co-conspirator thieves, continues to steal $4 million everyday in the kerosene subsidy scam as Nigerians were made to realize in February this year, and have called for the immediate cessation of. Diezani Allison-Madueke has evaded justice courtesy of her senator and executive friends who have for the past months, refused to immediately put a stop to her robbery of N100/liter of kerosene from all poor families of Nigeria for 10 million liters sold daily. Diezani Allison-Madueke is a dangerous and desperate thief who will never stop until she is accosted and reprimanded.
Her other open cases of private jet charter frauds, which continue to rob the nation of billions through her private co-conspirator criminal friends like Kola Aluko and several other open cases including her fraudulent transfer of N60 trillion’s worth—10 times the nation’s budget— of oil blocs to her other co-conspirator criminals like Atlantic Energy, remain open and reasons, as with many other crimes to o many to list, for her immediate accost by the good and God-fearing citizens of Nigeria.
We warn the public that Diezani Allison-Madueke is desperate and extremely dangerous. She is listed as a top criminal on the Nigerian Criminal Database. Please accost her with precaution and hand her over to the authorities for punishment. Anywhere Diezani Allison-Madueke is seen, we advise all Nigerians make a loud THIEF alert so others can join in castigating and the hunt for this potentially, extremely dangerous criminal.

Thank you for your usual cooperation in this urgent, serious matter.
The #AntiThiefSquad!
Dr. Peregrino Brimah
https://ENDS.ng [Every Nigerian Do Something]
Email: [email protected] Twitter: @Every Nigerian
The views expressed in this article are the author’s own and do not necessarily reflect the editorial policy of universalreporters