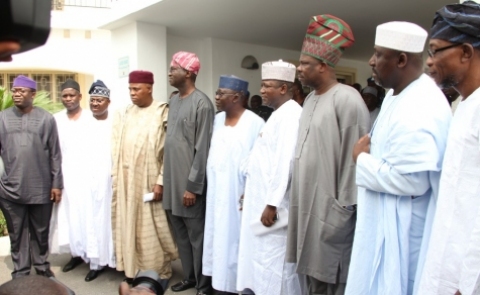 We at the Nigeria Labour Congress condemn in strong terms the denial of access to Ekiti of some APC Goverrnors notably, Messrs Rotimi Amaechi, Adams Oshiomhole, Musa Kwankwaso and Wammako of Sokoto State. The governors were billed  to take part in the party’s last mega rally before the gubernatorial election in Ekiti State.
The security officers that barred the governors cited orders from above. We wonder who gave these orders and on the basis of which authority the orders were given.
We at  the Congress believe the orders are a violation of Section 99 (1) of the Electoral   Act  2010 (as amended) which states that “For the purpose of this Act, the period of campaigning in public by every political party shall commence 90 days before polling day and end 24 hours prior to that day”.
It is also a violation of their constitutional right to freely move, associate and express themselves. The hypocrisy of “these orders” is laid bare by the their selective implementation as the Ministers of Defence and Police Affairs,  ( both of  PDP),  Messrs Musiliu Obanikoro  and Jelili Adesanya were said to have been  given passage with fanfare.
This conduct is not only a tyrannical use of power but an assault on our hard earned democracy and MUST NOT be allowed to stand.
We warn that those who undermine the democratic and constitutional rights of others not only endanger our democracy but make a bad investment as whatever goes around, comes around. President Jonathan should ensure this never happens again. The cavalier use of our soldiers, especially in furtherance of a dirty job is nihilistic.
We also find it necessary to caution against the over-militarization of the state as this has the potential of scaring voters from exercising their civic duty.
For the purpose of emphasis, we are not against providing security for voters but soldiers should not be deployed in a manner that suggest that the nation is at war with a foreign enemy.
Abdulwahed Ibrahim Omar
President