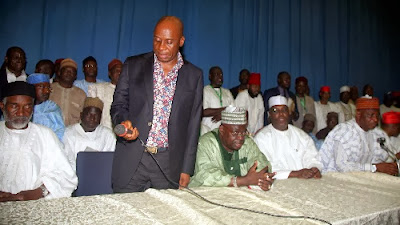 The suit by the ruling Peoples Democratic Party (PDP) asking a Federal High Court in Abuja to sack the G5 Governors for defecting to the All Progressives Congress (APC) has been dismissed as an exercise in futility. “The suit is laughable and betrays the ignorance of the PDP leadership about the laws of the land. It is also a further demonstration of the impunity associated with PDP in its disdain for democracy and due process,” erstwhile National Publicity Secretary of New PDP, Chief Eze Chukwuemeka Eze, said in a statement issued this afternoon in Abuja.
Subscribe to our newsletter
Eze quoted relevant sections of the 1999 Nigerian Constitution to prove that the seats of the affected governors, namely, Alhaji Murtala Nyako (Adamawa), Rotimi Amaechi (Rivers), Alhaji Magatakarda Wamakko (Sokoto), Alhaji Rabiu Kwankwaso (Kano) and Alhaji Abdulfatai Ahmed (Kwara), are safe.
His words: “For the education of the confused PDP leadership and its legal team, there is no danger of any of our Governors losing their seats as made clear by sections 68(1)(g) and 109(1)(g) of the 1999 Constitution of the Federal Republic of Nigeria (as amended) in relation to the status of members of a legislative house (state and national) who defect from the political parties from which they were elected to join another political party.
“The wordings of the aforesaid sections are in agreement with those of sections 64(1)(g) of the 1979 Constitution of the Federal Republic of Nigeria given judicial interpretation by the Supreme Court in the case of FEDECO Vs Goni (1983) FNR 203. This case was argued by the best legal minds of that era (Chief FRA Williams SAN and GOK Ajayi SAN). The court held that such a member keeps his seat if his defection is as a result of a division or split in his party.
“G5 Governors must be commended and congratulated for standing against the draconian and undemocratic acts of PDP and should go about their normal business as both PDP and its sponsors lack the power to sack any of them. This as well covers all members of the National Assembly who desire to join the Aso Rock-bound train (APC) come 2015.”
Eze said it was not debatable that PDP is crisis-ridden, thus guaranteeing that none of its members who defects can be punished as a result. He quoted and attached a recent letter by the Independent National Electoral Commission (INEC) voiding the suspension of Prince Olagunsoye Oyinlola, Alhaji Abubakar Baraje and Dr. Sam Sam Jaja as proof that PDP is in crisis.
The letter signed by INEC’s Secretary, Mrs. Augusta Ogakwu, was dated November 25, with reference number INEC /EPM/PDP/02/024/Vol.T/161 and titled: ‘Re: Suspension of Alhaji Abubakar Baraje, Dr. Sam Sam Jaja, Prince Olagunsoye Oyinlola and Ambassador Ibrahim Karaure from the PDP”. The letter, addressed to the National Chairman of the PDP, Alhaji Bamanga Tukur, reads: “This is to acknowledge the receipt of your letter dated November 12, 2013 informing the commission on the suspension of four members of your party.

“The commission notes that some of the individuals so suspended held positions covered by the provisions of section 85(1) of the Electoral Act 2010 (as amended) and that no notice of the meeting which approved their suspension was provided to the commission. “Accordingly, the records of the commission does not reflect the process and composition of the meeting that approved the suspension of the individuals, as such, the commission cannot establish an informed position on the matter “Please accept the commission’s highest regard and consideration.”
Eze supported INEC’s position by quoting Section 85 (1) of the Electoral Act 2010 (as amended), which states thus: “Every registered political party shall give the commission at least 21 days notice of any convention, congress, conference or meeting convened for the purpose of electing members of its executive committees, other governing bodies or nominating candidates for any of the elective offices specified under this Act.”
The former New PDP Spokesman accused PDP of mischief for instigating the Houses of Assembly in the affected states to start impeachment proceedings against the defected Governors as being witnessed in Rivers State, where six rebel legislators are desperately trying to impeach Governor Chibuike Rotimi Amaechi. He warned PDP to desist from any further act of destabilisation capable of plunging the country into chaos and truncating the country’s hard-won democracy.
In conclusion, Chief Eze asked how come that PDP received Chief TA Orji of Abia State and Chief Ikedi Ohakim former Governor of Imo State that defected from PPA and Alh. Isa Yuguda of Bauchi State who defected from ANPP and joined PDP without declaring their seats vacant. Now that PDP is at the receiving end of the same medicine they administered on others and they are window shopping for ways to have their cakes after devouring them. What a pity as about seven more PDP Governors will be joining APC by the first quarter of 2014 at that time they will be preparing on how to bury PDP formally by 2015
Chief Eze Chukwuemeka Eze
National Publicity Secretary of the defunct nPDP
Abuja

Still On The Open Letter To Governor Almakura Over Polarization Of Students Association.

Impeachment Call: Be Ready To Pay The Price Of Treason, Presidency Warns APC