Araraume And His ‘Injustice’ Heresy 1 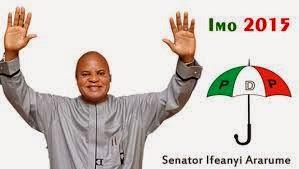 Since his return to the Peoples Democratic Party (PDP) late last year, Chief Ifeanyi Araraume and his handlers have made a song and dance of a purported “injustice” meted to him by the party in 2007. So frequently have they repeated this claim that it is already taking a life of its own. As they say, a lie repeated severally may begin to assume the status of a gospel truth, hence, the need to tell the senator, who seems to have made this matter his only campaign point in his current governorship bid, to desist from this deliberate blackmail for his own interest and that of the party.
Subscribe to our newsletter
In a nutshell, Araraume and his cohorts accuse the PDP of truncating his ambition to become the governor of Imo State in 2007. This was how Mr. James Okoroma, Araraume’s media aide, put it, in a recently published newspaper article: “…In spite of Araraume’s contributions to the growth and development of the PDP in Imo State, his loyalty to the party and victory in the 2007 governorship primaries, a tiny but powerful clique in PDP, which acted on rumour and hearsay, truncated his ambition to become governor. Even when the Supreme Court had declared him the authentic governorship candidate of the PDP for the 2007 election in Imo State, this powerful clique embarked on ignoble actions to render the judgment of the Supreme Court nugatory. And in the main election, Araraume went ahead to win but was eventually robbed of this victory after protracted legal battles, which were influenced by state institutions and some power individuals.”
But even the least knowledgeable fellow in Imo State knows that the above is sheer bunkum. Araraume never won the PDP primaries of December 2006 (not 2007, as incurably stated by Okoroma). It is a well-known fact that Araraume tied with another candidate, Hope Uzodinma, and a run-off election between the two was being put together by the party when Araraume went to Abuja to declare himself the candidate and before anybody could say “Jack Robinson,” he headed for the courts. Although the party took steps to discipline the irritant fellow for going against its rule that no member should take a matter to court without first exhausting internal machinery for dispute resolution, the party complied with the Supreme Court ruling that he was authentic candidate of the party for the 2007 governorship election in Imo State. In keeping with that ruling, he flew the flag of the party at the April 14, 2007 election and at the rescheduled one of April 28, 2007.
Araraume’s claims that a “powerful clique embarked on ignoble actions to render the judgment of the Supreme Court nugatory” is a hyperbole in the sense that his handler employs the word “nugatory,” which means “of no value.” How exactly did they do it? The court order was obeyed and Araraume suffered no inhibition of whatever type in going ahead with his campaign.
Okoroma was probably referring to the adoption of the candidate of another party (the Progressives People Alliance PPA) by a faction of the Imo PDP but that was an informal arrangement by some stakeholders, who felt piqued by the way and manner Araraume went about his ambition of becoming governor. To talk about “injustice” is to sound legalistic and since, legally speaking, the PDP as a party gave Araraume its flag to fly, in accordance with Supreme Court ruling, it is cheap to return, more than seven years later, to talk about the legalism of that episode.  As they say, you cannot put something on nothing. Araraume’s claim to injustice is simply a cheap blackmail on the PDP. It is a well-known fact that during the period of litigation after the election, the party in the state gave its support to him. The officials of the party in Imo followed him to all the court hearings till the end. In fact, the party leadership in the state maintained a distance from the PPA administration until the then governor, Ikedi Ohakim, returned to the PDP. As a matter of fact, there was tension in the state because of the general belief that the PDP-dominated State House of Assembly was going to impeach the governor whose party had only one member in the 27-man strong house. And, of course, Araraume worked very hard to achieve that but failed.

To play the devil’s advocate, it is not in the interest of Araraume to evoke the memories of that episode because it would make the people of Imo State, not just the party faithful, get angrier with him. Politics is played with people. Araraume thought his wealth could guarantee him the conscience of the people. If he were a  good politician, he would have made  good use of the PDP platform after the Supreme Court ruling . But what did he do?  He went ahead to denigrate every leader of the party while basking in the euphoria of the court victory. Instead of looking for how to reconcile with leaders of the party, Araraume went on as if he was already a governor-in-waiting. That he could not use the opportunity offered by the court ruling to bring back everybody to the fold meant that he lacked (and still lacks) leadership attributes.
The entire faithful of the PDP in Imo State are very scandalised by Araraume’s current posturing. Up till this moment, the leaders of the party, at both the state and federal levels, are still working hard to pacify the teeming party members  and supporters on why the party decided to receive Araraume back to its fold without him first making a public apology for his sabotage against the party between 2007 and 2011. Even in spite of the support given to him by the leadership of the party in Imo State, Araraume mounted a virulent opposition against the state government controlled by the PDP. He set up what he called Alliance For Good Governance with which he carried out a campaign of calumny against the PDP administration. When he could not achieve much with that, he moved over to the defunct  Action Congress of Nigeria (ACN) from where he not only campaigned against the PDP but also played a major role in preventing the party from exercising the mandate it won on the April 26, 2011 governorship election.
It is laughable that Senator Araraume is threatening that without him the Imo PDP will not win the 2015 government election. Hear his media aide, Okoroma again: “What Imo people expect PDP to do if it wants victory in 2015, is to revisit the events of 2007 and re-assure Araraume’s supporters who have all returned to the PDP with their leader that never again will injustice be used as a tool to rob a man of the benefit of victory.” How cheap! Who are Araraume’s followers? Even in Okigwe zone where he comes from, he is completely alienated from the leadership of the party there in spite of the fanfare with which he returned to the party. Agreed that the PDP needs to field a governorship candidate who will be able to match the incumbent, but its is certainly not Araraume, who has shown that he is not capable of winning a governorship election.
In 2011, he ran for governor under ACN and failed woefully. His party, of which he was the leader in the state, did not win even one seat in the state House of Assembly. So, why couldn’t he show his electoral prowess in the elections he ran previously? He talks about injustice but in 1999, but Araraume came from the then All Peoples Party (APP) to snatch a senatorial ticket in the PDP and proceeded from there to be in the Senate for eight good years. Yet, he had the temerity to insult and move against the party the way he has done in the last eight years. The PDP at the national level should caution Araraume for his current insult to the collective psyche of the PDP faithful in the state.
• Onuoha wrote in from Owerri, Imo State.