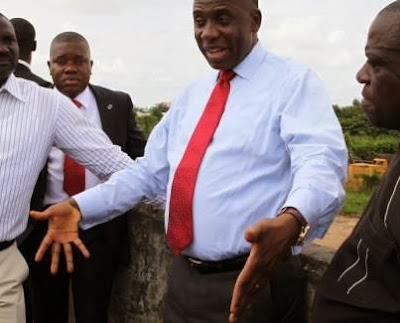 Subscribe to our newsletter
The New Peoples Democratic Party (PDP) chaired by Alhaji Abubakar Kawu Baraje has commended the Governor of Rivers State, His Excellency, Rt. Hon. Chibuike Rotimi Amaechi, for his steadfastness and exemplary leadership despite working under a hostile atmosphere deliberately imposed by the Federal Authorities bring about his downfall.
According to the splinter PDP, in its online press statement issued and signed by the National Publicity Secretary, Eze Chukwuemeka Eze said, “Against all odds, Gov. Amaechi has remained focused, providing the kind of exemplary leadership which has not failed to attract attention both at home and abroad.
For the New PDP, Amaechi has “scored yet another, first with the unveiling of Port Harcourt as the first city in Nigeria to become the UNESCO World Book Capital. The Rivers State capital, it would be recalled, had earlier defeated famous cities like Oxford and Moscow to become the UNESCO World Book Capital 2014. The event of last weekend is one in a series of events designed to usher in the 2014 dateline when Port Harcourt will become UNESCO 2014 World Book Capital”.
The rest of the statement reads:
“This ground-breaking development has received praise from far and wide because of its significance and the positive publicity it will bring Nigeria, a blessed country which is often in the news internationally for the wrong reasons due to the misgovernance foisted on it by a heartless cabal.
“Felicitating with the River State Government, Prof. Wole Soyinka, Nobel Laureate for Literature and Goodwill Ambassador/Member of the High Panel for Peace, UNESCO, said: “For us in the Book World, still basking in the glow of a Nigerian city bestowed with the honour of the World Book Capital for 2014, this is a much-deserved recognition. We look forward to next year in Port Harcourt, a historic capital city festooned with the written word with all its spiritually liberating manifestations.”

“We congratulate and felicitate with Governor Amaechi on this happy occasion. He is a role model who has risen above every distraction imaginable orchestrated by the Federal Government to continue to provide purposeful government for the good people of Rivers State.
“We also wish to congratulate him on the African Writers “Quintessence Leadership Award” for exemplary leadership conferred on him over the weekend in New Jersey, USA, by the African Writers Foundation. This is no mean feat considering the calibre of people that received the award.
“We wish to associate ourselves with the charge which the indefatigable Chairman of the Nigeria Governors’ Forum (NGF) gave to Nigerians in his acceptance speech while receiving the award. He was right in challenging Nigerians to demand accountability and transparency from their leaders since it is “the people are the core determinants of the dynamics of every society.”
According to Gov. Amaechi, “It is commonplace to hear in Nigeria that ‘our votes don’t matter’, but I tell you that through constant participation and insistence on transparency and accountability in the electoral process, the people can eventually have their way and the system has no other choice but to be straightened out.”
“The people remain the power-base of the nation. They determine the quality of leaders they get, and determine the direction of the governance. They can monitor accountability in governance and the strategic direction of the country.”
“The time has come for Nigerians to stop complaining in the comfort of their bedrooms and take their destiny into their own hands.
“Once more, we congratulate Gov. Amaechi even as we thank him for this wake-up call which, he hopes, long-suffering Nigerians will not fail to heed”.

Why I Am Campaigning for My Son – Dafinone