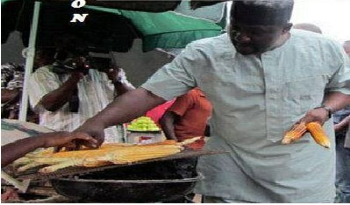 Let me start this week ritual by first welcoming my readers into this period of lent. As Christians, this is a very important period – a period that challenges our faith in our Lord Jesus Christ and to remember his sufferings on the cross for our redemption. This period called for sober reflection of the essence of our existence in this sinful earth. As a people, this Lenten period provides us  yet another opportunity to draw closer to God through intercessional prayer and restitution for we have all come short of God’s expectation as human being. Therefore, it is in the spirit of this Lenten period that I admonish all of you to observe this period with utmost carefulness and pray for this Imo State and nation especially as this will be the last lent before the 2015 general election going by INEC timetable.
Now having said that, we will now take off for this week’s episode together. As we all are aware, Nigeria particularly Imolites shall be going to the polls by February 14th and 28th 2015 to elect another set of political leaders in Imo State. Already, the system is gradually picking up with political activities and maneuvering among politicians and political parties. Among all the electable offices in 2015 in Imo state, I think the one that stands out is the Governorship. The reason is because any political Party or anybody that wins the Governorship, to a large extent controls the entire system. So all political parties and all individuals aspirant are not leaving anything to chance.
Subscribe to our newsletter
In this State of Imo, I think our people have learnt a lot of lessons with regard to the tactics and gimmicks of politicians or party candidates. In 2011 for instance,  so much deceit was employed, lies told, promises made, slogans used and political anthem sang, all geared toward  deceiving the people and ultimately wining their votes. Owelle Rochas Okorocha, who emerged from the blues just two weeks to April 2011 general election pretentiously descended very low to the point of eating Roasted Corn (Oka) and Akara, drinking pure water and in fact, visiting local markets to peal Egusi with village women. He made fantabulous promises of ‘Imo Must Be Better’. The Egyptians we saw yesterday, we shall see no more’ etc but at the end of the day, he succeeded in becoming the 5th democratically elected Governor of Imo State.
So I feel, after passing through this horrendous four years under Rochas Okorocha government where Imo is still far from being better and the same Egyptians we saw yesterday are still not only there with us, they  are in fact multiplying in their numbers. Imolites are better informed and armed about the tricks of politicians seeking for political offices for the sake of lining their pockets and that of their families and in-laws. This 2015 will be a decisive year for our political survival and growth. 2015 will be the year when Imolites will draw the line between political rouble rousers and genuine leaders. Next Year general election will afford Imolites another opportunity to elect leaders who will understand that achievements in contemporary society are not measured on building square this Square that or just building roads rather real achievements are actually measured by the level of public involvement in the business of governance and the general well being of the populace. After all, democracy is government of the people, for the people and by the people. The emphasis there is ‘by the people’ and not by one family. A situation where a Commissioner of a State cannot have the power to award contract of certain amount unless done by the office of the Governor or first lady or a particular in-law is absurd; A situation where all major Contracts are done by a particular company that has link with the Governor is to say the least most unfortunate and defeats the real essence of democracy.
As 2015 general election is fast approaching, anybody who thinks that eating roasted corn, drinking pure water, feeding beggars on the street or even sweeping the streets of Owerri just to demonstrate fake image of himself or herself will make Imo people cast their votes to the person must be joking. Imo people will not and cannot be deceived the second time. Imo people’s votes must be based on an unbiased and dispassionate assessment and understanding of the true specie of the person. We will ask questions this time around. No razzmatazz or braggadocio will help this time around.

In 2015, God will help Imo people to avoid anybody who will chain the economy and put the future of the State in great jeopardy. Imo people do not want to have a Governor who will personalize government neither will they pray for a government that deals on fantasies. We want a government that will reactivate the economy, give governance a human face, pay real attention to the local government administration in the State because that is mainly where the grass root draw their power. We will simply want the best.
Unfortunately, Imo is yet to be blessed with good Governors except perhaps during the time of the legend Dee Sam Mbakwe who genuinely did his best. I have said it without mincing word that the brand of leadership we have now under Rochas Okorocha is not close to what our people bargained for in 2011. I hold the veie that Rochas Okorocha has no reason whatsoever to fail Imolites because, I stand to be corrected, he is the only Governor who did not spend his money to win election. Rather, for the very first time many people ignorantly staked their money either as Gold, Silver, Bronze or platinum card members. They wanted a change of government from the last administration of Chief Ikedi Ohakim.
It was at this period of political turbulence occasioned by the blind desire for change that Rochas Okorocha emerged. Already, there was confusion among Imolites as to who they will vote. The ACN gladiators then led by Udenwa and Ararume were waging fierce war and propaganda against Ohakim. The Catholic Church was also on one side demonizing Ohakim after the reverend Father saga. Also, the dissatisfied and disappointed PDP elected officials and aspirants who were denied the party tickets as a result of the obnoxious template system on the other hand, joined forces against Ohakim including the presidency who was said not to be interested in Ohakim coming back as Governor. All these helped in weakening Ohakim government, generating tension and confusion in the State. It was at this time that Rochas Okorocha joined the race dangling his deceitful free education and Rescue Mission as a carrot to Imo people. Expectedly, many people got deceived and at the end Okorocha was declared the winner of the election. All is now history.
But in spite of the high expectations by Imo people in 2011, our State is still crawling. Governor Rochas Okorocha whom I feel has no reason to fail Imo people has not lived up to expectation. Many homes in Imo State today are in misery, many Contractors have died as a result of monies owned them; many people have lost their Jobs and other sources of livelihood as a result of either bad policies or mere political vendetta. As we write, our brothers and sisters at Imo state Specialist Hospital are on indefinite strike for over eight months salary owned to them. Pensioners are passing through difficult times yet a lot of noise is being made on radio and television. Who is deceiving who?
Well, this is just about the size of my message this week. But before you go, I wish to remind you again that truth is our watch word. We say it and it is the same truth that will set us free. Until next week, please remember to observe this Lenten period with prayers, penance and extend helping hands to one another.

Nursing Mother Who Sold Her Three-Day-Old Baby For N260,000 Arrested By Police