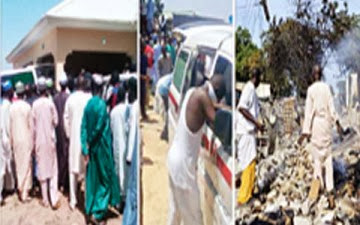 The 1 GAME Campaign Monday condemned the terrorist attack on a college in Gujba while offering its condolences to the people of Yobe over the death of at least 40 people in the incident.
“The 1 GAME Campaign condemns in totality the despicable terrorist attack on innocent students yesterday at the College of Agriculture in Gujba, Yobe State,” founder, Philip Obaji said in a statement.
“As we mourn with the people of Yobe who have been left devastated by such heinous act, we would say in the strongest possible terms that there can be no justification for the deliberate targeting of students and those catering for them,” said Obaji, adding that 1 GAME would continue to pray against terrorism in all its forms.
Obaji also said 1 GAME offered “deepest condolences” to the victims’ families and loved ones, and commended “the courageous response” by security personnel and first responders.

Yobe State Governor Ibrahim Geidam earlier confirmed that 40 people were killed and 4 others badly injured in the Saturday overnight attack on the college.
Meanwhile, the 1 GAME Campaign says it has postponed its planned visit to Damaturu, the Yobe State capital earlier scheduled for Tuesday, October 1 to a later date.
The campaign’s Project Development Coordinator, Agafi Kunduli said the postponement was to give the Yobe State Government time to focus on issues triggered by yesterday’s college attack.
“We’ve decided to suspend our visit,” Agafi said. “The State is mourning and needs time to sort out certain issues that became necessary as a result of the attack. We’ll announce a new date soon,” he added.
The 1 GAME Campaign was to kick off its tour of States in Nigeria’s North-Eastern zone aimed at enhancing basic education in the region with a visit to Yobe State on October 1.

President Jonathan Actually Said He Was Not Going To Contest 2015- Dr. Umar Ardo