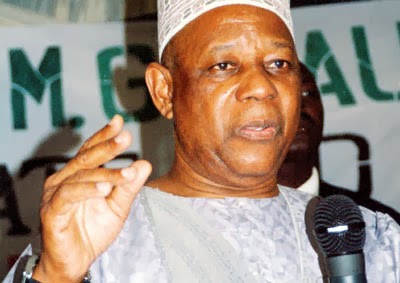 The same report  alleges that Aliyu Gusau, again as NSA under Goodluck Jonathan, released Boko Haram terror sponsor suspects to some northern leaders, for them  to “rehabilitate” them, in clear violation of the nation’s national  security, and in dereliction of duty that is implicated in thousands of  deaths.
The report alleges that Aliyu Mohammed Gusau as NSA did  not prepare any reports on the state of terror initiated by Boko Haram,  covering up this group; thereby failing his role as NSA to alert the  government and even the people. Rather than do so, he covered up the  terror organization, hence protecting them.
Aliyu Mohammed Gusau is a Spy, according to several WikiLeaks cables. There is tons of  embarrassing information on the internet where NSA Gusau as a state  traitor, revealed tons of sensitive national security information to  foreign agents in Nigeria and abroad.
Aliyu Mohammed Gusau, Babangida’s right-hand man, and ‘estate keeper’—married to current NSA Sambo Dasuki’s sister, Babangida’s bank-Aliyu Dasuki’s  daughter—according to NigerianPilot was suspected and investigated for links to the recent cache of deadly  ammunition in a bunker in Kano, linked to Hezbollah cells.
Aliyu  Mohammed Gusau as NSA never declared terrorists wanted; a primary  function of state security departments to alert the masses and  international security departments and enable them assist enforcement in capturing terrorists and fugitives.
When Gusau was replaced as  NSA, we have an example of how serious and committed people with no  tolerance to terror deal with terror. Major Gen. Sarki Mukhtar as NSA  under Yar’Adua, packaged a proper amnesty for MEND and dealt firmly with Boko Haram, slaughtering 700 and even the group leader when “he tried  to escape.”
Nigeria can no longer feed wicked and dangerous  officials recycled from the bins of our painful past, septuagenarians  and octogenarians that the administration keeps employed and  reemploying. Bamanga Tukur, just compensated by being put in charge of  our decaying and in need of dynamic resuscitation Railway, is an 80 year old recycled politician who should be reprimanded for violating the  anti-terror act with his statement in May of 2012, claiming Boko Haram was fighting for justice and another name for Justice.
The nation also needs a new NSA, because Sambo Dasuki, who strongly supports an amnesty for Boko Haram psychopathic rapists, drug users and killers, and is the in-law of Mohammed Gusau, also a dictator Babangida accomplice, is  clearly not fit for the sensitive security role.
Likewise, the  die-hard to be President Aliyu Mohammed Gusau should be immediately  detained and fully investigated for his role in facilitating the reign  of Boko Haram terror during his regimes as NSA.
Terror is not a joke and Nigerians are not disposable.
Dr. Peregrino Brimah https://ENDS.ng [Every Nigerian Do Something] Email: [email protected] Twitter: @EveryNigerian