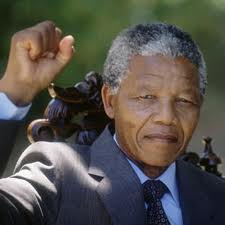 A former president of Nigeria, Olusegun Obasanjo, said the death of Nelson Mandela, the first black South African President, meant the world has lost a leader.
Mr. Obasanjo, speaking from his hilltop mansion in Abeokuta, Ogun State, on Thursday night, said his earliest contact with the former South African leader was when the latter was in prison in 1986, a meeting he described as ‘memorable.’ Mr. Mandela was in prison for 27 years and released in 1990.
Subscribe to our newsletter
Mr. Obasanjo said Africa would have been worse off and would not be complete if the purpose for which Mandela was jailed – elimination of apartheid – was not achieved; and Mandela elected to lead his country from racial and tribal division into a rainbow united society.
“We have lost a world leader by the death of Nelson Mandela,” he said, adding that “One of my earliest contacts with Nelson Mandela was in February 1986 when I visited him at Polls-moor Prison in my capacity as Co-Chairman of the Commonwealth Eminent Persons Group on Southern Africa.”
“He dressed defiantly in ANC belt and reminded me of his visit to Nigeria in 1962. Though appalled by Apartheid, I left his prison cell deeply convinced that the history of South Africa and, indeed, Africa would be worse off and would not be complete if the purpose for which he was in jail – elimination of apartheid – did not end for him to be in a position to lead his country from racial and tribal division into a rainbow united society.
“As we discussed during the visit, Mandela mentioned in passing that ‘if he got out of prison’…I interrupted him that ‘it was not if, but when…’ From that moment on, I resolved to do everything humanly possible, personally and working with my group to facilitate the release of Nelson Mandela from jail because South Africa and the world needed Mandela to be alive and released to be able to give South Africa the smooth transition it would need from an apartheid system to popular participation by all South Africans in their own governance.”
Mr. Obasanjo said that the eventual release of Nelson Mandela from prison was inevitable, and narrated another experience he had with the late South African leader.
“On a visit to South Africa, I called on Mandela after he was released from prison on Sunday, 11 February 1990. He pulled me out of the hotel and made me to stay with him and his family in their house in Soweto.

“During the first non-racial democratic elections in 1994, I was on election observation assignment in South Africa and was there for his campaign and when he, Nelson Mandela, cast his own vote in a post-apartheid South Africa. He was devoid of bitterness or anger against anybody except he hated apartheid system. He went on to win the election and more importantly led South Africa to the extent that the country was able to cast aside its apartheid legacy and take its place in comity of nations,” the former Nigerian President stated.
Mr. Obasanjo gave kudos to Mandela for not eyeing a second term in office, stating that, he (Mandela ) was convinced that his task was completed.
“Nelson Mandela modestly refused to seek re-election after his first term in office as his presidency elapsed. I still recall his pragmatic words when he said to me “Olu, show me a place in the world where a man of 80 years is running the affairs of his country’.
“This, to me, reflects an unequalled sense of modesty for a man who spent 27 of the prime years of his life in prison for a just cause and still kept a calm and peaceful disposition to those who took away his freedom for all those years of his life.
‘The last time I saw him was about two years ago. I went to visit him at his Johannesburg residence. His health had deteriorated somewhat but he was still very alert but did not talk much during our discussions; Graca did more of the talking.
“As the whole world pays tribute to Madiba, I join them in celebrating the life of a man who raised the beacon of human struggle to lofty heights of nobility and whose life is an example of what we should all aspire for.
“His struggle and our struggles remain the same and as we all seek for answers to deal with today’s challenges. His demise is a loss to his family who would miss a caring patriarch, the people of South Africa who would miss a guide, Africa who would miss a role model and the world who would miss a leader.
“In all situations, he lived nobly and died in nobility. Let us bear in mind that we all have the opportunity to act nobly in whatever position we find ourselves. When we teach our children the lessons for tomorrow, let us be reminded of the lessons Mandela gave the world in forgiveness and forbearance. May his soul rest in perfect peace,” Mr. Obasanjo said.
Source: Premium Times

Corruption As An Effective Tool Of Rights Denial: A Case Of 419 Governance