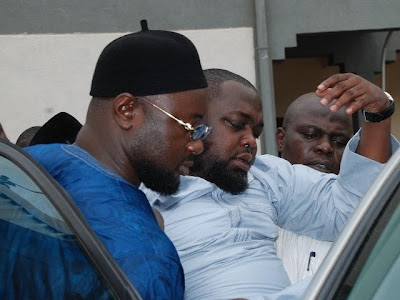 There was a mild drama yesterday when the publisher of a Kaduna-based newspaper, Desert Herald, Malam Tukur Mamu, was arraigned before a Magistrates’ Court 5 on Gaborone Street, Wuse Zone 2, Abuja. The publisher collapsed and fainted minutes into the commencement of the court proceedings, a situation his lead lawyer, Mr Abdul Mohammed, attributed to prolonged fatigue and non-access to medication by his client  who had been in police detention.
Subscribe to our newsletter
Mamu, it was learnt, has a medical history that required daily medication. The publisher, it was further learnt, was denied access to his medication since his arrest and detention on Monday.
The publisher was arrested on Monday in his office in Kaduna over a purported order by an Abuja magistrates’ court in a case filed by the minister of the Federal Capital Territory (FCT), Senator Bala Mohammed, and one Ibrahim Bomoi.
At exactly 11:54am, the presiding magistrate, Chukwuemeka Ubani, emerged from his chambers into the courtroom after which Mamu was docked. A police officer, DSP Stanley Nwodo, announced his appearance as prosecuting lawyer for the FCT commissioner of police and the publisher’s lead lawyer with two others also announced their appearance for the defendant. But, two other lawyers announced their appearance for the complainant, to which Mamu’s lawyer raised objection, saying only the commissioner of police is a complainant in the case and there cannot be any other. The situation led to an argument among the lawyers on one hand and the magistrate and defence lawyer on the other. But the magistrate overruled the objection when the two lawyers said they were only in court to watch brief for the complainant.
The prosecution asked the court to allow the defendant take his plea. When the court clerk read the charges preferred against Mamu and the magistrate asked him whether he understood the allegations, the defendant said he only understood them “partly”. Thereafter, the magistrate read the charges again to which Mamu said he understood.
The two-count charge accused Mamu of publishing defamatory information about the minister of the Federal Capital Territory, Senator Bala Mohammed, “depicting him as corrupt and greedy,”  in the Desert Herald newspaper. It was also alleged that the defendant sought the sum of N15m bribe from one Nosike Ogbuenyi, the special assistant (media) to the minister, for him (Mamu) “to stop further publications”. When the magistrate asked whether the allegations were true, Mamu’s response was in the negative.
The prosecution lawyer told the court that they only appeared in court for recognition, as investigation was ongoing. He, thereafter, made an oral application pursuant to Section 129 subsections (a) and (b) of the Criminal Procedure Code (CPC). Before he could conclude the application, Mamu collapsed and fainted, a situation which brought the proceedings to an abrupt halt, as there was apprehension in the courtroom by Mamu’s relations and friends who feared for his life. Spirited efforts were made to revive him after the magistrate stood down the case.
There was uncertainty whether the trial would continue or not, as the defendant could no longer stand on his feet after he was revived. The magistrate emerged from his chambers for the second time and ordered that Mamu be taken to the hospital for treatment pending when he is fit to stand trial. The magistrate also turned down his lawyer’s attempt to apply for bail, saying it was unnecessary since the defendant could not even stand for trial.

The court later adjourned the case till September 9, 2013, as a tentative date for the resumption of the trial, as the magistrate said he would not continue with the trial without a medical report certifying the defendant fit.
Mamu was rushed to the hospital in company of security men in an ash-coloured Acura Jeep marked BE 953 MKA. LEADERSHIP Friday’s findings later showed that he was taken to Wuse General Hospital, Abuja.
Mamu is having a running battle with the FCT minister over his (Mamu’s) insistence on publishing a book entitled “FCT Administration: The Rot Within,” which is about the administration of Mohammed as the FCT minister. He had earlier filed a case against the publication of the book at an Abuja high court.
In an interview after the court session, Mamu’s lawyer said he wondered why an incident that happened in Kaduna would be brought to Abuja for trial.
In another development, unknown men had broken into the Desert Herald’s office in Kaduna on Wednesday and carted away three laptops, one external hard drive containing vital information, some audio CDs and official files.
Meanwhile, the Protection Rights of Journalists of Africa (PRJA) has called on the President Goodluck Jonathan to urgently call the minister of the Federal Capital Territory, Bala Muhammed, to order in response to the arrest and detention Mamu.
According to the PRJA president, Mr Adamu Abubakar Gwarzo, “It is unfortunate to detain such man of integrity in the same place with red alert criminals. Nigeria, the most populous nation in Africa was recently ranked 115th out of 179 countries on the 2013 Press freedom index.
Source: Leadership