These Police Are Not Our Friend By Adekoya Boladale 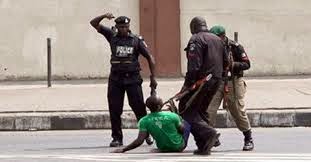 Most people around the world have often talked about the deceit and cunning ways of the Central Intelligence Agency (CIA), but if you have not had a (un)gracious opportunity of been hooked in the arms of the Nigeria Police Force but have drawn conclusion based on the radiant sky blue camouflage of the few pot-bellied chiefs on media platforms, you are living in complete illusion.
Subscribe to our newsletter
Beyond the smiles of ‘happy weekend sir’ and the gesture of ‘oga sir’ lies one of the most Luciferious organization ever set up in human history. The name itself and the coat of arm are distinctly innocent of the plague that seems to be passed on from generation to generation in the force. Though the superstitious have argued that their inhuman ways are not unconnected with their black uniform which is regarded as an unpleasant symbol in the parlance of the monotheistic; this theory however have been proven to be untrue as their way of life have been more ‘Thottbot’ than ‘Bes’ even when the uniform was changed from black to blue.
You may not understand where I am coming from but after reading the account of a now repented Assistant Superintendent of Police, you will agree with me that the sign posts at various ‘counters’ with phrases like ‘bail is free’, ‘police is your friend’ are nothing more than what they are, sign post. Like me, you may finally decide to run every time a police officer approaches you and keep a far distance from any member of your family who unfortunately is a police officer, as one thing I have come to realize, the psychic of an average, innocent Nigerian changes automatically once he/she join the force.
Rasaki (not real name) also known as “Day Devil” is a dare-devil and notorious criminal who have been placed on the police wanted list for over two years. Day Devil is a household name in the South western part of Nigeria and when his business empire grew large, he decided to establish various cells in the South East and North Central part of the country. His business is multi sectoral, there is a department that handles stealing, this they call ‘Sharp boys’, individuals in this department are made up of young boys within the age of 9-18 years, their job description is simple; identify weak links in traffics and parks then snatch any valuables and disappear. The other department called ‘Small Danger’ is made up of con men most who graduated from the feeders Sharp Boys league, they are professional armed robbers who have caused tones of havoc and brought sorrows to homes and families.
The third department named ‘The Boss’ is a collation of the best hired assassins around, who have committed some of the most mysterious killings in the country both political and economic, this department is where Rasaki belongs and control.
Growing up Rasaki was a well buttered guy who never experienced the hardship of Makoko or Ajegunle, his parent raised him with diamond spoon and he had access to the best luxury money can buy but within him he felt incomplete, more like divine created him for a more superior mission than the university education his parent are pressuring him to attend aboard, on a fateful night Rasaki ran away from home never to return again.
After years of fruitless search and hunt with continuous tales of agony of few individuals who have lived to recount their ordeal in the hands of ‘day devil’, the Nigeria Police Force successfully arrested Rasaki on a fateful night while returning from an operation. Other members of the gang died during shoot out and as fate would have it Rasaki was captured alive.
Dragged into the Police Station brutalized and smashed, Rasaki was locked up in one of the cells awaiting processing. Then the Division Police Chief came in and ordered that Rasaki be interrogated immediately so the police can have more insight to the mode of his operation. During the process of interrogation, Rasaki introduced himself as the son of a very influential and popular political figure in the country, this particular side of the confession suddenly caught the attention of the police chief and officers who immediately neglected the official assignment and began the process of reuniting Rasaki with his parent.

Tajudeen is the only son of his parent, his father died when he was young and when he attained teenage-hood it became his responsibility to take care of his aged mother. Tajudeen didn’t have much education as he opted out of school after Junior Secondary School to begin the role of father and husband to his mum who have been down with tuberculosis for some months.
It is in this pursuit of happiness that Tajudeen took up a labour job at a construction site, this he does by day and by night he resumes at the mortuary where he washed the dead. On this fateful night Tajudeen closed late from the mortuary and had to trek 10 kilometers home from the morgue. With 3 kilometers down and seven more to go Tajudeen noticed the approach of the police patrol van. This didn’t bother him as it is only normal that the police take a security check especially at this time of the night. Unfortunately for Tajudeen, the patrol that night was not a security check but a deep search for a look Rasaki lookalike and as misfortune would have it, Tajudeen fit the picture.
Taju was picked up, beaten and smuggled into the waiting police van without questioning. Arriving the police station, he was locked up in an inner cell and all his effort to speak or explain himself proved abortive. Few minutes later he was approached by three officers with the Police Chief who called him Rasaki, stunned and dumbfounded Tajudeen makes effort to correct the Chief that he is not Rasaki but every effort he makes was met with series of slaps and boot-kicking. The Police Chief told Tajudeen that he is Rasaki, the renowned criminal who have been declared wanted by the force for long and these weapons ( opening the bag with him) were found on him when they arrested him. In total shock and disarray Tajudeen could not believe his ears and eyes, not only has his identity been changed in record time but he has been accused of committing crimes and given weapons he has never set his eyes on not to talk of operate.
A week later, Tajudeen was unveiled to the press as Rasaki and the now changed Tajudeen who seems to have gone through hell and back with noticeable signs of extreme torture was just nodding to all questions put across to him.  He has been tortured beyond sanity and seems to have accepted his fate. Tajudeen was arraigned in Court and eventually sentenced to life imprisonment where he committed suicide after twenty years in prison.
The story of Tajudeen is one out of the many tales of terror innocent Nigerians have suffered in the hands of supposed enforcer of the law. Individuals who have been mistakenly shot only have tonnes of weapon placed beside their lifeless body as notorious criminal, stories of citizens who have been cheated, brutalized, lied upon and murdered for just being in the wrong place. The Nigerian police force is an institution engulfed in first degree corruption whose officers will trade anything to cut corners. Suspects are never investigated but assumes guilty once arrested, thousands are locked up in cells and prisons awaiting trials for crimes they did not commit. Hundreds have been killed with little opportunity to tell their side of the story.
Until there is a complete overhaul of the Nigerian Police, please when next you see them in unusual circumstances, run as fast as your leg can take you.
Adekoya Boladale wrote via [email protected] Please engage on twitter @adekoyabee or Facebook www.facebook.com/adekoyabee

2015 Governorship: No Selection Panel, No Crisis In Abia PDP